Sooraj said that his association with project was restricted to bringing out a Government Order as PWD secretary sanctioning the SPEEID programme.

KOCHI: The Ernakulam unit of the Vigilance and Anti-Corruption Bureau (VACB) on Thursday interrogated former PWD secretary TO Sooraj in the Palarivattom flyover construction graft case. Sooraj was questioned for around three hours at the Vigilance office here.

After the interrogation, Sooraj said his association with project was restricted to bringing out a Government Order as PWD secretary sanctioning the Sustainable and Planned Effort to Ensure Infrastructure Development (SPEEID) programme. “I was the PWD secretary till November 2014. When I was removed from the post, even the piling work had not commenced. I only issued a GO for the SPEEID programme which comprised 51 projects including Palarivattom flyover. There are no technical issues with other projects constructed under SPEEID,” he said. 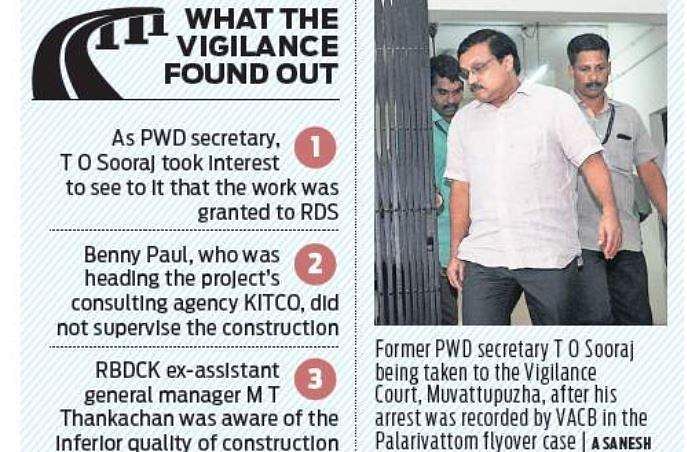 However, a VACB official said the purpose behind the interrogation was to verify about corruption in the tendering process and design. “We are aware that most of the construction work took place after Sooraj was discharged as PWD secretary.  However, he knows about the tendering process. Similarly, the design of the flyover was accepted during Sooraj’s tenure.

The experts have even pointed out to the irregularity in the design of the flyover,” an officer said. Sooraj is no stranger to graft cases. In fact, the Enforcement Directorate (ED) is probing several cases and properties, including those owned by his family members, worth `8.80 crore have been attached under the Prevention of Money Laundering Act (PMLA).

VACB is likely to arraign more persons as accused in the case. “We have collected enough evidence against some key persons who were directly involved in the project. A sanction in this regard has to be obtained from our headquarters after which we will file a report at Vigilance Court to include more persons as accused,” said an investigating officer.

ALSO READ | TO Sooraj is no stranger to corruption cases

The flyover has been closed for traffic for the past four months after cracks appeared in various parts of the structure. A team from IIT-Madras, which first inspected the bridge, submitted a report to PWD Minister G Sudhakaran highlighting the flaws in construction.

The tarmac got damaged within months of the flyover’s commissioning in October 2016. VACB in its FIR arraigned contractor, designing agency, officials of KITCO, the consulting agency and officials of RBDCK which awarded work to the contractor as accused in the case.