Hailing from Thrissur, Shilpa relocated to Singapore in 1999 when she received the prestigious Singapore Airlines academic scholarship.

KOCHI: Eight stories. Eight different Indian languages. All happening at 8pm in Singapore. This is what filmmaker Shilpa Krishnan Shukla has portrayed in her feature film ‘Kathaah@8’ which was screened in the World Cinema category in IFFK. 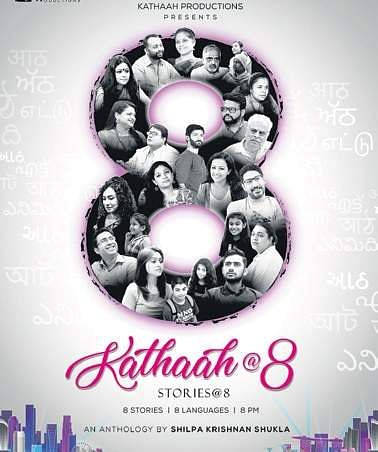 ‘Kathaah@8’ boasts of the debut of 18 Singapore-based actors. The film explores different themes such as love, loss and longing and also speaks about hopes, dreams, fears and sorrows that each character face in their lives. The first anthology to be written, produced and directed by a single filmmaker, ‘Kathaah@8’ is a micro-budget film where the stories have been told in Punjabi, Marathi, Gujarati, Bengali, Malayalam, Assamese, Telugu and Tamil.

Hailing from Thrissur, Shilpa relocated to Singapore in 1999 when she received the prestigious Singapore Airlines academic scholarship. Her passion in filmmaking began after her first two films, both a minute-long, got shortlisted in the top 25 films of an online film festival in 2008.  Since then, filmmaking has been Shilpa’s passion. ‘Kathaah@8’ is her fourth feature film.

Shilpa says she zeroed in on her actors via an open call on Facebook and grouped them accordingly based on the languages that they could speak. Her previous film ‘Tashi’ was a bilingual with dialogues in English and Hindi. “It was very challenging working with languages that you don’t know. But, as I was familiar with Hindi, I didn’t have much problem making ‘Tashi’,” she said.

On why she chose to shoot the film in eight different languages, she said, “After my film ‘Tashi’, I wanted to work with languages that I was very less familiar with. The number ‘eight’ was the outcome of the actors and languages that they spoke. Based on this, I wrote the scripts accordingly.”

‘Kathaah@8’ beautifully features the relationships between spouses, siblings and friends, all happening simultaneously at 8pm. The film has been shot over nine nights and opens up spans one and a half hours.
Shilpa is currently focusing on writing scripts.

Talking about IFFK, the filmmaker said, “IFFK has been a very good platform for independent filmmakers like me and the audience has been great. It has been a privilege to be here and this is the first time that the 18 Singapore-based actors made their debut.” ‘Kathaah@8’ has been selected to be screened at the 17th Chennai International Film Festival on December 12 and will also be screened at the 18th Dhaka International Film Festival, 2020.