KOCHI:  In a major development, the Central Bureau of Investigation (CBI) on Thursday filed a chargesheet at the CBI court in Kochi against the former managing director of Fertilisers and Chemicals Travancore Ltd (FACT) and seven others in the case related to irregularities in disposing of gypsum.CBI had to wait for a long period to file the chargesheet after prosecution sanction against former MD Jaiveer Srivastava, an accused in the case, was delayed by the ministry concerned. It was in October 2016 a case was registered against FACT officials for selling gypsum, a fertiliser byproduct manufactured by FACT, to private companies.

The graft was brought to light after FACT allegedly agreed for a gypsum deal with a Hyderabad-based private firm. As per norms, the procured gypsum should be sold only to cement companies and not be given away as fertiliser or soil conditioner. Also, the lid was blown off when the gypsum, sold usually to cement manufacturing companies for `600 to `1,200 a tonne, was allegedly given to the Hyderabad-based firm at `130 per tonne. 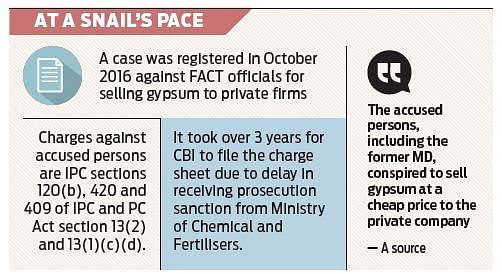 “During the investigation, CBI could collect enough evidence against former MD of FACT to file a chargesheet against him and others. The deal with a private company had caused massive loss of several crores of rupees to FACT. The accused persons, including the former MD, conspired to sell gypsum at a cheap price to the private company,” a source said. “There were even lapses in tendering procedures. There were seven accused in the FIR and we added a private company as well in the chargesheet,” the source said.

The accused persons were charged with offences under section 120(b), 420 and 409 of IPC and section 13(2) and 13(1)(c)(d) of Prevention of Corruption Act.“An internal inquiry led by an officer of managing director level was required to receive sanction against Srivastava who is a joint secretary-level officer. However, the inquiry could not be completed on time. This delayed sanction from the Ministry of Chemicals and Fertilisers. However, CBI moved the Central Vigilance Commission which directed the ministry to speed up procedures. CBI waited for more than a year to receive the sanction,” said the source.