Vyttila hub phase II work to get under way in 2020

Rs 572cr-plan to be implemented in 7.23 acres; society to seek loan from French agency

KOCHI: The efforts to turn the Vyttila Mobility Hub into the control centre of integrated transport activities of Kochi will get a major fillip soon as the second phase of its development will start in early 2020.

The state cabinet has given administrative sanction for the Rs 572 crore development plan which will be implemented in 7.23 acres of land at the existing hub. In addition to new bus terminals, a multi-storeyed parking facility, accommodation facilities for crew members of buses, a hotel and commercial establishments are also part of the second phase. The estimated time for completion of the work is 24 months.

“The administrative sanction was accorded based on the detailed project report prepared by KMRL. Now the agency will prepare detailed drawings and cost estimate of each component included in the second phase.

“We have also initiated the proceedings to avail loan from  Agence Française de Développement (AFD), the French Development Agency which will be providing external borrowing for the project. The loan proceeds will be moved through the Department of Economic Affairs at Ministry of Finance,” said R Girija, managing director, Vyttila Mobility Hub Society (VMHS).

Eighty per cent of the total project cost will be provided as a loan by the French agency and the remaining will be pumped in by the state government.

“The remaining proceedings including the appointment of the nodal officer and preparation of contract estimate are also progressing. We expect to complete the preliminary steps in six months. Once the work starts, it is expected to be completed in two years,” she said.

The second phase development of the hub was on a standstill since the initial planning in 2013.
Though the tender proceedings were initiated in 2015 for carrying out the work under PPP (public-private-participation) mode, it did not materialise as nobody placed a bid.

The project got a fresh lease of life after KMRL roped in for the preparation of DPR and execution of the work. As per the current plan, the work will be completed on the Engineering, Procurement and Construction (EPS) model.

Work to be divided into two phases
The second phase of development will be subdivided again into two—Phase-A and Phase-B.
Phase-A will consist of major work in the second phase including the construction of bus bays and parking facility. The remaining miscellaneous works will be included in Phase-B.“It was as per the instructions of the chief minister, who is also the chairman of VMHS that we have decided to complete work in two phases. The construction work will be prioritised accordingly,” said Girija.

Green Cover to be maintained
In tune with the green policy, the construction activities of the second phase will be restricted within 27 per cent of the total land available at Vyttila. Out of  27 acres, only 7.2 acres will be used for the second phase. After constructing roads and parking areas, nearly 40 per cent of the land will be kept as such without hurting the existing greenery. In addition to the existing trees, new saplings will be planted to develop a green lung near Vyttila, one of the busiest junctions in the state. A rainwater harvesting facility is also a major component in the second phase.

Multi-storeyed parking
The multi-storeyed parking area can accommodate more than 1,000 cars and over 2,000 two-wheelers. The proposed boat jetty of KMRL, which is being built as part of the Water metro project, will also be completed soon. With the existing bus terminal, already commissioned metro rail station and the proposed water jetty, Vyttila hub would turn into a centre which integrates various modes of transport including road, rail and water. 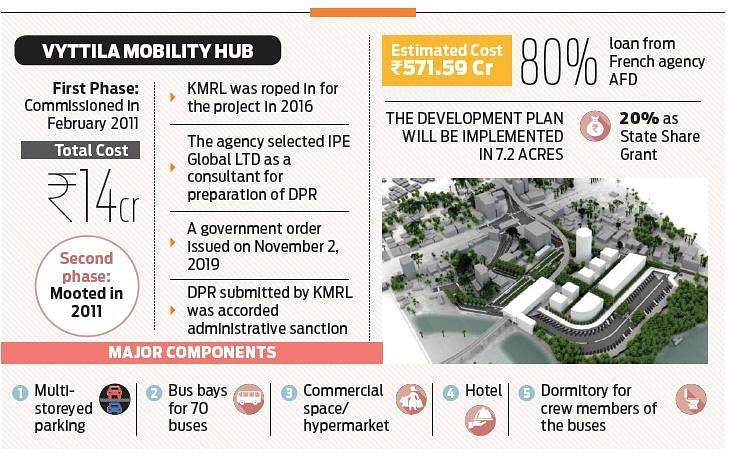 Now we are on Telegram too. Follow us for updates
TAGS
Vyttila Mobility Hub Kochi