While Tripunithura municipality is all set to introduce kiosks for waste collection,  Udayamperoor panchayat has started a facility wherein a truck would collect waste from the houses within its limit

KOCHI: While the Kochi Corporation races to ensure 100 per cent doorstep collection of waste generated in all 74 wards under it, the suburbs in Ernakulam have it taken it upon themselves to provide stiff competition.

Wards under the Udayamperoor panchayat and Tripunithura municipality that are notorious for burning waste in the open might soon have effective methods of waste disposal. While the Tripunithura Municipality ensured garbage is collected from public dumping sites and sent to the waste-disposal facility at FACT, the door-to-door collection was left unnoticed, which had led to several residents disposing of the waste by burning them in their backyards.

Municipality chairperson Chandrika Devi says that regardless of awareness campaigns on the detrimental effects of burning garbage, residents continue with it. 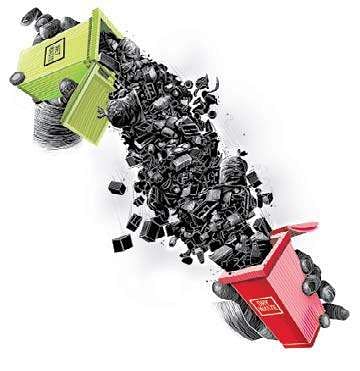 We have even fined individuals for unscientific disposal, but still the practice continues. We had introduced a project in which kiosks will be installed in all 49 wards for waste collection, which will be operated by Kudumbashree workers. Waste will be segregated at the kiosks by those manning them. Currently, kiosks have been introduced in two wards, while some of them are yet to provide us with the required space in their ward. A nominal fee is fixed for every house that uses this facility. We had set up a few kiosks at schools but they remain unused,” she said.

“Burning waste was a serious problem that arose due to the lack of efficient waste disposal facilities and the rapid growth of residences, which is also against the Municipal Solid Waste Management Rules. While most places in the city have a door-to-door collection, the situation in suburbs is not given importance. Hopefully, after the new initiatives, one has better options to dispose of waste,” said Joseph Baby, a resident of Udayamperoor.

John Jacob, Udayamperoor panchayat president, has started an initiative which could put an end to the decades-long method of burning waste in the wards.
“In June, we started a facility wherein a truck would collect waste from the houses within the panchayat limit. However, the project had loopholes such as the correct number of houses not being taken into account. So, we have decided to hold a meeting with residents’ associations, political party members and authorities concerned wherein strict laws will be introduced -- action will be taken against individuals engaged in public dumping and burning of waste. It will be collected from houses and disposed of scientifically,” he said.

Inching close to 100 per cent mark
In early August, the State Level Monitoring Committee had asked the Kochi Corporation to ensure 100 per cent waste disposal under Corporation limits by August 31.
Corporation health supervisor Thomas Joshy said that as per the last meeting, it stood at 88 per cent.
“Junior health inspectors and health inspectors were to compile a report of waste collection and segregation done in every house under each ward. re currently compiling those reports. Only after the process is done, a confirmation can be given,” he said.

Dry  waste
collection hubs
After the success of the dry waste collection hubs in Thiruvananthapuram this year, Kochi is all set to welcome such hubs. “Currently, we have four of them for which the tendering process is on- it will take a month’s time. The facilities will be installed at Edapally, Kaloor, Padiyath and Mattancherry,” said Thomas.

More from Kochi
Now we are on Telegram too. Follow us for updates
TAGS
Kochi Corporation