KOCHI: The Kochi Metro, which has attracted tremendous response from passengers after the opening of the Thykoodam stretch on September 4, has started to report operating profit of over `2 lakh per day -- the fastest metro to achieve this feat in the country. The Kochi Metro Rail Ltd (KMRL) reported operating profit within two years and two months since its launch while the Delhi Metro achieved this in about four years.

According to officials, though there is a 50 per cent discount on Kochi Metro fares till September 18, the rise in ridership -- from nearly 40,000 per day before the new stretch was opened to over 91,000 on Monday -- more than compensated for the revenue loss due to discounted ticket charges. “We have been posting operating profit since April. However, we wanted the numbers to stabilise before announcing it,” said KMRL managing director A P M Mohammed Hanish. 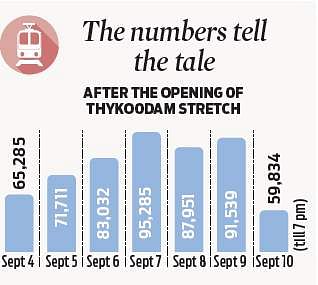 He said only 50 per cent of the daily revenue comes through ticket sales while the other half is earned via advertisements and rents from food courts, banks, financial institutions and Norka facilitation centres at the metro stations. Hanish said he is confident that the ridership will settle above 60,000 per day from September 19, when the discount fare offer ends. “We can break even at 55,000 ridership. With 60,000 per-day ridership, we can be running on an operating profit of `2 lakh-plus,” said Hanish.

It would not be a surprise if the ridership crosses 70,000 per day even after the fare discounts are lifted, given the condition of the roads and the road traffic snarls. Once the speed curbs are lifted on the Maharaja’s College-Thykoodam stretch, the travelling time will come down from 53 minutes to 44 minutes on the entire metro route, which will also encourage more people to opt for the metro, an official said.

KMRL also expects the ridership to touch one lakh this week on account of the Onam rush, with the timing extended till 11 pm on Tuesday, Wednesday and Thursday. At 7 pm, the ridership on Tuesday touched 59,834. Hanish said Kochi Metro is witnessing an average ridership of 20,000 on the Maharaja’s College-Thykoodam stretch since its launch last Wednesday.

More autorickshaws at stations
KMRL said as part of ensuring last-mile connectivity, the Kochi Metro and the Auto Rickshaw Society have decided to deploy sufficient number of autos at all metro stations. Discussions were on between the society and KMRL to deploy autos considering the rise in ridership. “Since the opening of the new stretch, the metro has witnessed a steady increase in the ridership. The average ridership was 40,000 per day. The Auto Society has ensured that a minimum of five autos will be present at each station,” a release said.

More from Kochi
Now we are on Telegram too. Follow us for updates
TAGS
Kochi Metro