GST slash on room tariff a major relief for state’s tourism sector, which is in dire need for a boost post Nipah outbreak and the flood

KOCHI: The cut in Goods & Service Tax (GST) rates and the reduction of visa charges are expected to attract more foreign tourists to Kerala during the tourism season that starts in October. The GST rate for room tariff between `1,000 and `75,000 per night was slashed from 18 per cent to 12 per cent recently. Similarly, GST for rooms with tariff above `7,500 per night was brought down from 28 per cent to 18 per cent.Visa charges for a tourist to visit India during peak season was slashed from $100 to $25. During the off-season, the visa charges have been brought further down to $10. 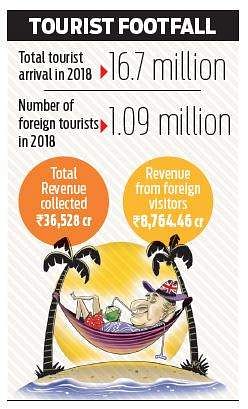 Association of Tourism Trade Organisation India (ATTOI) Secretary Manu P V said the Union government’s decision to slash GST rates will boost the sector. “Our tourism sector was on the brink of collapse after the introduction of GST, Nipah outbreak and the flood last year. The decision to slash the GST rate is a major relief. The room rates will come down during the peak season. Similarly, reducing the visa fees will certainly help us attract more tourists from abroad,” he said.

Travel Agents Federation of India (TAFI) Kerala Chapter chairman Paulose Mathew said the reduction of GST is certainly a positive step. However, he demanded a uniform GST to avoid confusion among stakeholders. “We have to deal with six or seven categories of GST in the tourism industry. If the GST rate of all the services and facilities is integrated, all stakeholders will benefit from it. The GST rate cut and reduction of visa fees are a welcome move from the government,” he said.

The Tourism Department is hopeful that the sector will attain further growth in the coming months. “We attained good growth in the first and second quarters of the year. The impact of the flood this year was minimal. We had tourists from abroad during the monsoon season. The results of the third quarter will be out by the end of this month. With the season beginning in October, we expect further growth in the last quarter of the year as well,” said  Tourism Director P Bala Kiran.

This year, Kerala Tourismwas represented across the globe including at major industry events. “We did attract tourists from abroad and other states in India during the Onam season. We can confidently say that Kerala tourism has revived from the impact of Nipah and floods,” he said.

Stay up to date on all the latest Kochi news
Now we are on Telegram too. Follow us for updates
TAGS
Kerala tourism GST