KOCHI: With experts across the world sounding alarm bells about climate change and degrading environment, sustainability has taken precedence over most aspects of our lives. And when it comes to the spaces we inhabit, ecological architecture is soon becoming the buzzword.

However, popular perception decrees that building an enviornment-friendly house of one’s dreams involves employing state-of-art methods that come at a huge cost. But a 900-sqft space mud house envisioned by Sacred Groves, a sustainable housing project in Auroville, Tamil Nadu proves that mother earth is a humble sentinel. 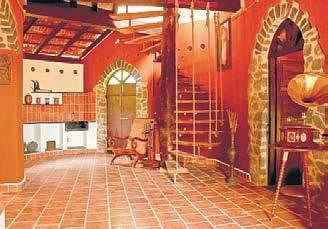 Built by using locally available and ethically sourced mud, stone and wood and by employing local artisans, the structure is a standing example of natural architecture. The house which is replete with a sit-out, a drawing-room, two bedrooms and two washrooms is located inside a farm near Pondicherry.

“The brief we got from the owner who himself is a builder is for a quaint farmhouse that reflects the indigenous culture of the region. The cement content we used would be less than one per cent. We also made built-in furniture for all the rooms. The walls facing North are curved so as to prevent heat from hitting a flat surface,” says Sarin Veetil, one of the principal architects of the project. Sarin who is from Kannur has been working with Sacred Groves for the last five years. While the foundation is fortified with locally sourced rock, the walls have been built with customised sun-dried mud bricks.

“The soil was mixed with shell lime and a gummy liquid secreted by Murrel fish. The mixture was fermented for some time and then moulded into a brick shape before being dried under the sun. Lime was used as the binding mortar,” says Sarin.

The traditional sloping clay-tiled roof has been given a modern twist with a partial terrace laid with lime concrete. Framing of the roof, the staircase and patio accents have been furnished with the re-purposed wood of five different trees native to the region. The spiral wooden staircase, one of the focal elements of the drawing-room has been erected using mango tree wood supported by an unpolished eucalyptus tree trunk.

“While one end of each step fixed into the trunk which acts also acts as a pillar the other end is held firm by a metal rod that connects each plank, this folding plate method ensures that the stairs are self-supported,” adds SarinTo go with the warm mud hue of the house, rust orange tiles have been used for the flooring as well as in the kitchen. The washbasins carved out of stone and mirror finish lime-plastered walls give the washrooms a rustic charm.

Those saying 'we won't show papers', will soon won't be able to show their faces: Dilip Ghosh