KOCHI: Acute water shortage made life hell for employees of Infopark, Kakkanad, here on Wednesday. Woman employees were worst affected by the shortage, caused due to inadequate supply to the campus where 43,000 techies work.

The employees said the campus had been affected by water shortage owing to a drop in supply for the past five to six days. “Things worsened on Wednesday,” said an employee.

Infopark officials said the restrictions placed on water tanker lorries over sourcing water – under Operation Pure Water – was the reason for the inadequate supply.

However, as per the directive of the district administration under Operation Pure Water, water tankers can draw water only from Kerala Water Authority’s hydrants.

Employees working in night shifts complained they had to go outside the campus – spread over 100 acres – at times for water.

“With the pumping of water from the Kadambrayar stopped, the campus is fully dependent on water tankers and this has been cut down now. The campus is now using water stored in fire tanks and rainwater harvesting tanks. Many wash room units are closed. In the past five to six days, just one water tanker came which won’t cater to our needs. With water in fire tanks being used, our safety is compromised,” said an employee of Infopark.

Another employee said a common restroom in Athulya block (inside the campus) was the only one working.

“At times, the security staff had to collect water for us in buckets. This is the situation in one of the best IT parks in the state. While many go to their houses at night when the supply is cut, woman employees can’t commute at the time. Already, several facilities are lacking here and now, we are facing water crisis too,” said an employee working in the night shift.

Woman techies are forced to leave the offices by 4pm due to the water shortage. “Restrooms don’t have water supply and water has to be collected in buckets. It’s hard to work in such conditions,” said a woman techie. 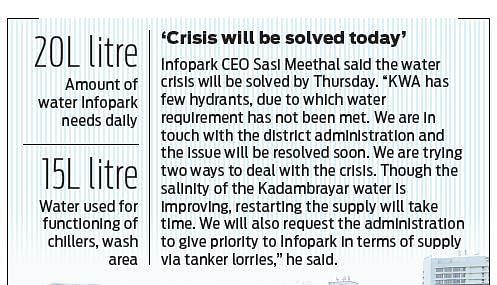 Stay up to date on all the latest Kochi news with The New Indian Express App. Download now
(Get the news that matters from New Indian Express on WhatsApp. Click this link and hit 'Click to Subscribe'. Follow the instructions after that.)
TAGS
water shortage Infopark

In a relief for India, European Parliament delays vote on anti-CAA motion till March