Malayalam films depicting gold smugglers in heroic mould have drawn massive audiences. But in real life, there is no hard evidence of any unholy nexus between Mollywood and this syndicate. With the Shamna Kasim case sparking renewed interest on the issue, Express examines the topic upclose

In I V Sasi’s 1983 release Iniyenkilum, the narrative has a major sequence in which the antagonists rope in members of a cultural troupe staging shows abroad to smuggle in foreign goods. There have been several Malayalam movies where ‘smuggling’ and ‘smuggler’ were shown in either white or grey -- Tharadas, Alexander, Sobharaj, and Sagar Alias Jackey who says, “Narcotics is a dirty business.” Their gripping plot and compelling portrayal meant that many heroes were born on celluloid.Apart from the gold ‘deals’ and ‘gold biscuits’ shown on screen,  tinsel town was never directly linked to the ‘shady’ business till the beginning of this decade.  But 2013 changed that forever.

The involvement of gold smugglers in the film industry came to light following the arrest of T K Fayaz, a Mahe native. The Directorate of Revenue Intelligence (DRI) which got wind of the racket found that Fayaz had close links with several actors and models. He also appeared in a song sequence in Sringaravelan (2013). According to the officers, Fayaz also had close contacts with actors in Tamil Nadu and police officers in the state. 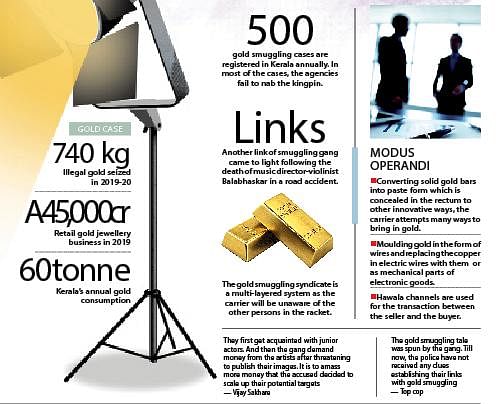 Now, with the blackmailing case in which a group of impostors allegedly targeted actor Shamna Kasim, the gold smuggling syndicates’ connections with Mollywood have become a talking point yet again.  Though enforcement agencies like Customs and DRI could not establish a direct link between the film industry and gold smugglers, officials believe that the sector is an easy platform for smugglers to engage in money laundering activities.

When TNIE sought the reaction of some technicians and actors on the issue, they preferred not to comment. “It is not reluctance. There have been past incidents in which the names of some actors were dragged into similar cases. But there were no popular names among them and they had not established themselves in the industry. If police are aware of the details or have hard evidence to establish the alleged unholy nexus, they should carry out a comprehensive probe to unearth the facts.

But keeping the public guessing which will only results in wild speculation that brings everyone, who organises/stages shows in the Gulf, under a cloud is not good,” said a producer on condition of anonymity. Meanwhile, officials believe that everything is not ‘white’ and the connection between the glam world of film and fashion and ‘gold deals’ cannot be easily shrugged off. They also said the CBI, which registered another case against Fayaz over the involvement of Customs officers in the smuggling activity, had recorded the statement of celebrities in the film industry.

“A Chennai-based model,  a prime witness in the case, claimed that she got to know Fayaz through a well known Malayalam actor. We recorded her statement as well. From our investigations, it has come to light that the smuggling activities are centred around Gulf countries. The smuggler/dealer bankrolls the cultural programmes in the Gulf attended by a  a sizeable section of Malayali diaspora, with celebrities being flown in as special guests,” said a CBI officer associated with the probe into the gold smuggling case.

“In the case of Fayaz, he used to offer his luxury cars for film shooting. Whether indeed celebrities were used for smuggling activities is yet to be looked into,” he said. Another link of smuggling gang came to light following the death of music director-violinist Balabhaskar in a road accident. DRI which busted the Thiruvananthapuram based gold smuggling racket which smuggled over 150 kg of gold last year had information that one of the gang members was a close aide of the deceased musician.  “Though we probed  the involvement of the artist, we couldn’t find any  evidence. Prakashan Thambi, who was Balabhaskar’s manager, is a key accused in the case. But there is no hard evidence of  Thambi having used Balabhaskar as a cover for the smuggling operations,” the DRI official said.

Money laundering
According to Sumit Kumar, Commissioner of Customs, Kochi, despite lack of proof of an unholy nexus between Mollywood and the gold smuggling syndicate, the kingpins. who are actual beneficiaries of the smuggling activity, can use the movie platform for money laundering activities.  “They can lure anyone in need of urgent cash. But more than using celebrities as carriers, they can use the industry for money laundering by financing movies. Movies and restaurant business are the two major avenues for easily turning black money into white as every aspect of the transactions in these businesses cannot be traced,” he said. Kumar said though ‘carriers’ get caught, smuggling is a multi-layered activity.

“There will be at least 10 to 20 persons between the actual procurer of the gold and the carrier.  Hence, carriers will be clueless on the actual brains behind the operation. The end user, to whom the smuggled consignment is intended for, will remain unknown to them.” he said.

Now we are on Telegram too. Follow us for updates
TAGS
Malayalam films