Food for the bachelor pad

KOCHI: Antisha Ann, a young chef, in collaboration with the curators of EatKochiEat has launched a new series named ‘EKE Bachelor’s Kitchen’ on their official Instagram page. “The idea was to come up with something which could help bachelors who don’t know the basics of cooking,” says Biniyas V L. Both Biniyas and Karthik Murali are the founders of EatKochiEat page on Instagram which has over 127k followers. The series features Antisha and Biniyas, trying out recipes of less common, easy to make dishes. 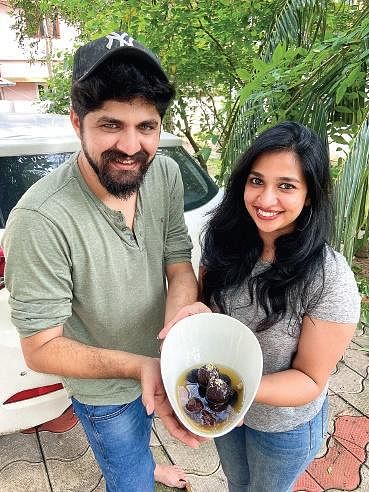 Bachelor’s Kitchen is a spontaneous and quirky series where Antisha brings in the basics of cooking and recreates restaurant-style dishes through simple and accessible ingredients. “We are trying to bring in recipes which sound difficult, but can be prepared with minimum and easily available ingredients. We also suggest alternative ingredients that will maintain the taste and flavour of the dish,” she said. Antisha is a professional chef and has worked at the Grand Hyatt, Kochi.

“We have already tried out Banoffee pie, two different pasta recipes and a Tamil style chicken omelette curry in our previous videos. We try not to bring in any inspirations or references as it gives us a chance to improvise recipes in the simplest manner,” she added.“We post the videos on a weekly basis and have been receiving good response from our followers due to the fun element in the series,” Karthik said. “We have always tried to keep up a surprise element in our videos. At the same time, we wanted this series to be nothing like the existing online shows on social media platforms, “he said.

The show is also ideal if you want to pick up on kitchen hacks right off the chef’s cookbook, like how to check your pasta is cooked enough, just throw it on the fridge and see if it sticks, demonstrates Antisha.
“This series is dedicated to all the struggling bachelors who are having a complicated relationship with their kitchen. Currently, we are only posting videos on Instagram but will soon improvise the show with few new elements,” Karthik added.