Locked down in a frame

Meet Sooraj Babu, who welcomed by lockdown by painting its elements in many colours

KOCHI: Sooraj Babu, who works as a creative designer in a firm in Bengaluru, used the lockdown period to create some thought-provoking illustrations on Covid-19 and realistic paintings featuring destinations that we cannot visit. The 28-year-old Palakkad-native has been painting from a very young age. He reached Palakkad as soon as the lockdown began and was in self-quarantine. “My painting kit had limited supply. I started getting frustrated after the first two days since I couldn’t go out. Afterwards, I thought of ways to keep myself engaged.

So, I started doing illustrations based on the ‘stay at home’ campaign. Later, I saw a photo of a policeman giving a banana to a commuter. So, I did an illustration called ‘Ithuthaanda Police’. There was a lot of negative news on social media about police officers. I thought their good deeds should reach people too,” says Sooraj. 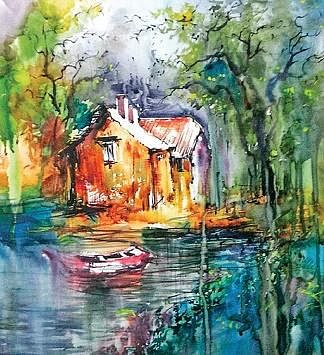 The realistic paintings are based on various landscapes in Kerala. “Many people miss travelling. So I painted places where people would love to travel, like beaches. I took photographs holding the paintings and posted them on social media platforms with a small story. People loved it and the paintings were shared widely on many Facebook groups and on Instagram,” adds Sooraj, who exhibits the works through ‘Sooraj Babu’s paintings and illustrations’ on Facebook and ‘artoholiq’ on Instagram.

Sooraj believes that an artist should always have a social commitment and should use the medium to express their views on various societal developments. His mission during the pandemic was to engage people while at home. “We won’t get such an opportunity again to be at home. So, I gave painting classes via Zoom and even people from other countries like the USA attended it. As the classes got popular I got around 50 participants,” he says.

An aficionado of watercolor medium, he also does acrylic paintings. His paintings have been featured in shows in Italy and Vietnam. Though he takes up commissioned works, he never sees it as a business. For Sooraj, painting outdoors brings out the best in him. “I usually go out to parks in Bengaluru. This challenges me as there will be people and noise around, or even unfavorable climate conditions urge me to wrap up the work earlier than expected,” he says. So, what was did Sooraj miss the most during the lockdown? “Of course the workshops. I used to conduct at least one every month. I’m longing to conduct one as soon as the situation becomes normal.”