The annual maintenance of roads and bridges which have been transferred to the district panchayat got the highest allocation in the budget.

KOCHI: Social welfare, education and infrastructure sectors received the highest priority in the district panchayat’s budget for the 2020-21 fiscal year which was presented on Wednesday amid the Covid-19 scare. The budget with a surplus of Rs 2.36 crore presented by district panchayat vice-president Abdul Muthalib projects a revenue receipt of Rs 180.45 crore and expenditure of Rs 178.09 crore.

The annual maintenance of roads and bridges which have been transferred to the district panchayat got the highest allocation in the budget. As much as Rs 78.4 crore has been allotted to the public works sector for the road works and their maintenance.

“The back-to-back floods in 2018 and 2019 had caused a lot of worries to the public. Clogged canals and drainages were one of the reasons for the flooding. Learning a lesson from it, we have decided to allocate a major share for the cleaning of canals and drainages,” said Muthalib while presenting the budget which was cut short to one hour due to the Covid-19 protocol. The second-highest amount of Rs 61.89 crore has been allocated for the development of Scheduled Castes and Scheduled Tribes.

Shelter for women
For the one-day home project for women who reach Kochi for several purposes, D40 lakh earmarked for women safety will be utilised. The education sector has been allocated D15.5 crore. No new projects have been announced. Midday meals for schools, CCTV cameras in schools, sports kits and biodiversity gardens are the only projects announced in the education sector. Spoken English project and anti-drugs campaign in schools, which received major appreciation,  also failed to find a place in the budget.

For haemophiliacs
The district panchayat has decided to allocate D1 crore to provide free medicines to haemophiliac patients in the district. Though it had earmarked D50 lakh last year for distributing medicines to the patients, it was insufficient to meet the requirements. “Haemophilia is a rare disorder in which the blood doesn’t clot normally. Since the medicines for the same are really expensive, we have decided to allocate D1 crore,” said Muthalib. 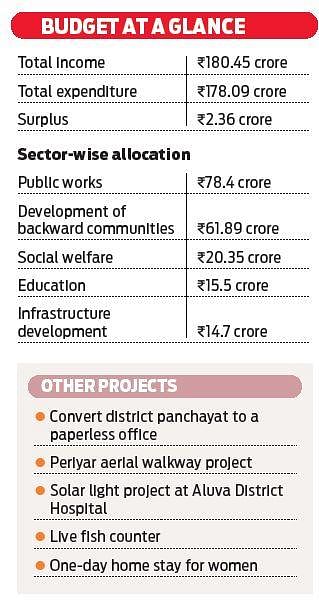