Smitten with a tune

Music producer and guitarist Ashwin Aryan’s debut English single, ‘In my head’, is a breezy track on love accompanied by quirky and eclectic visuals

KOCHI: A good song or tune can keep your blues away. And with the ongoing pandemic pushing the world into despair, a number of singers and musicians are coming up with songs that make one cheerful. ‘In my head’, the debut single of music producer and guitarist Ashwin Aryan, is one such peppy song which is sure to leave a smile on one’s face. The song and the accompanying music video which were released on YouTube and other platforms recently are garnering exceptional response for the interesting lyrics and the quirky and eclectic style of making.

The video’s USP is that Ashwin’s friend and art director Rony C Mathew directed and shot it on an iPhone. The song shows the protagonist dreaming of a relationship with a girl whom he recently met. Ashwin terms his three-minute English song as one with a ‘naughty’ shade. “The lyrics are all about the protagonist’s dreams after meeting the girl. I believe most of us are in the same state when we are infatuated with someone. Finally, the guy realises she is with another person and comes to terms with it. But he soon starts thinking of another relationship. 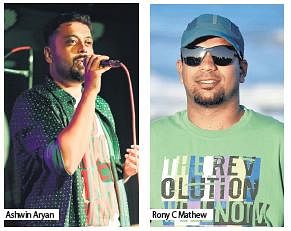 This scenario might not be real, it is all in the protagonist’s head,” quips Ashwin, who also composed the song. Music director Rajesh Murugesan, Aishwarya, Karthika Raghvan and Rony are part of the music video’s cast. According to Ashwin, he composed the song seven years ago. “Maybe I didn’t feel confident about the song then.” Ashwin was reminded of the song by Rony when he was in Chennai for work. “Rony initiated the idea of making a music video. Maybe things fell into place at the right time. The song was shot on the terrace of Rajesh’s flat near Thiruvanmiyur Beach. It was a collective effort by a team of good friends.

All we were particular about was making sure the song entertains the viewer,” says Ashwin.
The lyrics are written by Ashwin and his sister Neelima P Aryan. Renjit Varma handled the editing. “We had a joyous time shooting the video within the limitations. The only thing that troubled us was the unpredictable weather. The lack of proper natural light prolonged the shoot during production and we even faced heavy rain. Finally, we shot extensively for around two days and completed it. We couldn’t do the shooting outdoors as the locality had recorded a few Covid positive cases. Renjit’s editing made all the difference in the end,” says Ashwin.

Ashwin, who is a guitarist in music director Roby Abraham’s band ‘Everafter’, has worked in movies like ‘Premam’ and ‘Gauthamante Radham’.  ‘In my head’ has received accolades from the creme de la creme in the music industry including Roby, Deepak Dev, Sooraj Santhosh, and D Imman, to name a few. “I have received many messages appreciating the song. A lot of people are sharing the song on social media platforms. Being an English single, I was sceptical about the response. However, now I realise that there’s a huge community in Kerala who waits for English singles. I’m enjoying all the praise,” says Ashwin.