The land of coconuts has been forced to procure 90% of its fibre needs from neighbouring states. Today, almost the entire spinning industry in Kerala is dependent on the supply of raw husk from TN.

KOCHI: Joy Sebastian, Cherthala, Alappuzha-based tech startup founder, who recently won the central government award for creating a videoconferencing platform, has a part-time job these days -- ‘tech advisor’ to Finance Minister T M Thomas Isaac.In his personal capacity Joy is helping Isaac, who is also the Coir Minister,  resolve some of the so-called technology-related issues that have cropped up in the recently developed Coirfed mobile tech app.

The app is aimed at bringing the entire procurement and sale of coir fibre and yarn under a single mobile platform. There’s a problem, though. “Government officials and suppliers cite one reason or other to avoid transactions through the tech platform,” said a source. The result is that the system is still running in the old model outside the app without any quality checks of the fibre procured. There is no price transparency either. “Money is going down a big black hole,” the source said.

The Thiruvananthapuram-based Centre for Management and Development (CMD), headed by former chief secretary S M Vijayanand, had developed an app to bring all the fibre suppliers on the Coirfed tech platform which will direct the supply to the spinning cooperatives. Not just price transparency and quality assurance, the app was also meant to ensure public audit. Aluva-headquartered Federal Bank was brought on board to facilitate the payments through the system. “Moving into the tech platform is meeting with a lot of resistance. This is delaying the entire process of streamlining the procurement of fibre from the mills, ensuring its quality and transparency in the payments,” the source added.

Joy, the founder of Techgentsia Software Technologies, termed the so-called glitches in the app ‘teething issues’. “He (Isaac) asks me if there are issues and how to resolve them if any. I offer suggestions. The minister is trying to understand the system and make efforts to fix  software issues,” he told TNIE. Kerala’s coir sector once used to occupy the pride of place and its ‘golden fibre’ is rated top quality. However, during the last five decades the sector has been in a state of decline.

The land of coconuts has been forced to procure 90 per cent of its fibre needs from neighbouring states, especially Tamil Nadu. Today, almost the entire spinning industry in Kerala is dependent on the supply of raw husk from Tamil Nadu. “In the last 50 years, Kerala’s husks have never been procured for processing,” said a senior official involved in the coir revival mission. To give another perspective consider this: Kerala is home to 5.2 billion coconut trees but less than 5 per cent of the coconut fibre that these trees produce was being used till recently.

As Isaac says in his book Coir Kerala: The Agenda for Modernisation: “...because there are no buyers for the small quantities of the disaggregated husk (which lies on the ground), it lies as waste strewn across a million homesteads across Kerala. In such a situation, Kerala is buying coir fibre from Tamil Nadu and then subsidising it to keep its own coir industry alive! The current story of Kerala’s husk and coir industry is an unmistakable irony which every Keralite should deeply embarrass Malayalis. After all,  coconut trees grow virtually in every Malayali’s backyard.”

The revival plan will address the root cause of the issue, which is to encourage a large number of small defibering units to come up across the state. The government is providing subsidies of up to 90 per cent. Compared to Tamil Nadu, which has huge defibering units, Kerala requires smaller units. This is because the average landholding under coconut cultivation in Kerala is about 20-25 cents as against the nearly 200 cents in the neighbouring state. “We have two machines –- with a daily capacity to handle 10,000 husks and 15,000 husks, respectively,” said the coir revival mission official, adding, over 150 units have been rolled out, mostly in Thrissur, Palakkad, Kannur, Kozhikode and Malappuram districts.

“The beauty of these small defibering units is that even at 40-50 per cent of the production capacity or  at 5,000 husks per day, they can run profitably,” said an official.  Suresh Kumar, managing director, Kerala State Cooperative Marketing Federation (Coirfed) said there has been a significant increase in the fibre procurement from within Kerala after the defibering units were set up. From a measly 5 per cent, the domestic procurement of fibre  had increased to 19 per cent in 2018-19 and 34 per cent in 2019-20, he said. “In terms of percentage growth, the procurement shot up by 1,188 per cent in 2018-19 from the previous year. And on the basis of that growth, we grew by another 83 per cent in 2019-20,” said the Coirfed MD. 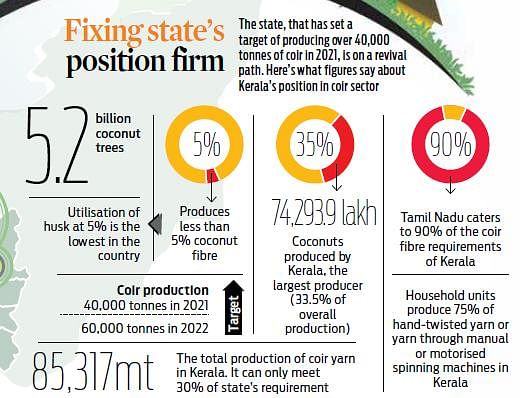 A source said though local procurement has witnessed an increase recently,  the real transformation of the coir sector will happen only when we embrace technology and automation. Kerala’s coir is also not picking up as Coirfed is taking a long time to pay, they said. “Most of our societies are unable to produce results because when you are buying from the farmer you have to pay him immediately. This is not happening. If there are supply issues, the machinery will function erratically. When that happens it fails and everything goes wrong,” the source said.

On the reluctance of suppliers and Coirfed officials to embrace the new tech  platform, Kumar said there are 722 societies and they need to be trained to upload the details into the system. A source  said only four details need to be uploaded through the system – invoice, weighbridge receipt from the starting point (mostly TN), weighbridge receipt from Kerala (ending point) and acknowledgement letter stating quantity received on society letterhead.  “This is not rocket science. They are simply refusing to come on board. They want this opaque system to continue,” added the source. N Padmakumar, special secretary (industries-coir), Kerala, said every system takes time to settle. “It’s a long drawn process. To bring everyone on the same page will not be easy. But there’s no deliberate attempt to scuttle the system.” The plan chalked out by Centre for Management Development for Kerala’s coir sector, has laid out plans to procure husks from small growers too – those homesteads growing even one or two coconut trees. “If you have 100 people giving three-four coconuts, we have a truckload of coconuts. This is designed to suit a typical Kerala homestead,” said the official quoted earlier.

In 1861, British editor Charles Allen Lawson saw the fast-growing coir industry on the backwater shores in Kerala and he compared it to the cloth manufacturing units in villages in England. But the trajectory which the coir industry took was different. While in England, the cotton industry was consolidated into units of mass production, the coir industry largely remained a cottage industry.

By the end of the 1960s, a scheme to reorganise the Kerala coir industry had been launched. This reportedly propelled the number of people employed in the sector from 2.51 lakh in 1961 to 4 lakh during the 1970s. Since then it has been a downhill journey.  This new push titled ‘Second Coir Reorganisation’ is a do or die battle to bring Kerala’s coir back to its former glory. For this to happen, both automation and technology have a major role to play. Time is running out for Coir Minister Isaac as the state will go into election mode soon. In six months, he has to see the new system up and running.

Consumers world over are moving away from synthetic to natural products due to growing environmental awareness. Coir is now considered the world’s largest source of natural fibre with only 10 per cent of the potential utilised. This is Kerala’s chance. Can we seize the moment? Or will we squander this opportunity as had been the case in the past? We will know soon.

Now we are on Telegram too. Follow us for updates
TAGS
coconuts Coir industry