Hectic campaigning over, it’s time for candidates to relax

After taking part in hectic campaigning for nearly a month, candidates took a well-earned break after voting concluded on Tuesday.

KOCHI: After taking part in hectic campaigning for nearly a month, candidates took a well-earned break after voting concluded on Tuesday. With nearly 26 days to go before the results are declared on May 2, some candidates returned to their normal routine while some decided to put their feet up. 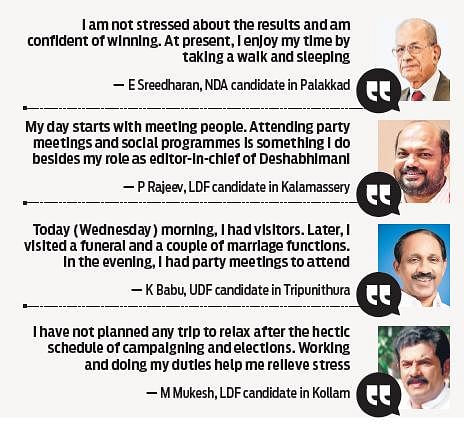 For K Babu, the UDF candidate in the Tripunithura in Ernakulam district, the busy schedule was on. “Today (Wednesday morning, I had visitors and was busy listening to their problems.

Later, I visited a funeral and a couple of marriage functions. In the evening, I had party meetings to attend,” he told TNIE. “I like solving people’s problems. That is a stress reliever for me post elections,” Babu said, adding that being a politician was a 24x7 job.

In comparison, CPM state secretariat member P Rajeev, the LDF candidate in Kalamassery, returned to normal routine.“My day starts with meeting people and giving media briefs. Attending party meetings and social programmes is something I do besides my role as editor-in-chief of Deshabhimani,” he said. On weekends, he heads to Vaikom, where he has a farmland, to take a break.

Actor-turned-politician M Mukesh, who is looking to retain his Kollam seat, said since the wait for the results is now on, he has resumed his works as MLA. “I have not planned any trip to relax after the hectic schedule of campaigning and elections. Working and doing my duties help me relax,” he said.Metroman E Sreedharan, the NDA candidate in Palakkad, said he was not stressed about the results and was confident he would win. “At present, I enjoy by taking a walk and sleeping,” he said.

Now we are on Telegram too. Follow us for updates
TAGS
Kerala Elections