Although the officials admitted that the roof of the plant had collapsed, they demanded more scientific data on river pollution.

KOCHI: Even after the fire outbreak at Brahmapuram waste treatment plant in March, there has been no serious effort from the Kochi Corporation to address the situation, alleged the Pollution Control Board (PCB). According to officials, the corportion is showing sheer laxity in complying with the Solid Waste Management Rules of 2016.

“We have been directing the municipal body on the danger of letting heaps of waste and effluents flowing into Chithrapuzha and Kadambrayar. Despite issuing repeated orders, the corporation hasn’t taken any measure,” said a PCB official.

Earlier, the state level monitoring committee (SLMC) appointed by the National Green Tribunal (NGT) to oversee solid waste management had come down heavily on the local body and state government for willful negligence. “Inspections by the SLMC  found that officials are intentionally re-routing the effluents and leachate to the marshy area lining the river. Besides, the septage treatment plant is not working. Most parts of the plant have been without maintenance for months now. SLMC added that the dysfunctional windrow composting unit is also hindering solid waste management facilities. Sadly, the corporation is constantly ignoring the directions,” said the official. Meanwhile, sources close to Kochi corporation have clarified leachate is not being flown into the rivers.  “We have set up a septage treatment plant with a capacity of 1 lakh litres. Treatment of industrial effluents will not be an issue for the corporation. Besides, we are regularly composting waste at the site,” said the official.

Kochi corporation secretary recently replied to the notice issued by the PCB compiling all the measures taken up by it  over the years.  Although the officials admitted that the roof of the plant had collapsed, they demanded more scientific data on river pollution.  “As the corporation has set up septage treatment plant for addressing leachate, there is no direct draining of untreated waste to the rivers.

The PCB is yet to take concrete action against industries polluting the Kadambrayar river upstream by releasing toxic effluents. We need more data to substantiate the deterioration of water quality in the areas close to the Brahmapuram waste treatment plant,” added the official.

Statistics speak
The data published by the local self-government department pointed out that around 164 tonnes of solid waste out of the overall 1,199 tonnes generated by urban areas of Ernakulam remains untreated. Among the total waste produced by the district, 370.57 tonnes is dry waste.

As much as 592 tonnes was managed through decentralised methods, while 349 tonnes are being recycled by respective local bodies. Waste weighing around 93 tonnes reaches landfills. 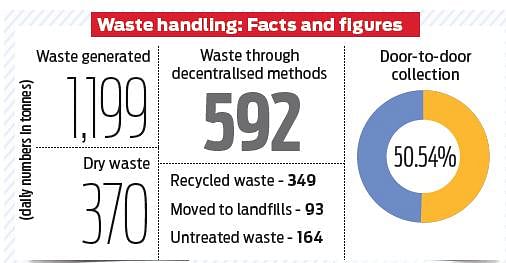 Compensation burden
The compensation for families evicted to establish the Brahmapuram treatment plant is another problem for the corporation. Though the acquisition happened around a decade ago and the state government dispersed the quoted amount in 2008-09, the landowners approached the High Court for better compensation.

With the court’s recent judgement asking to pay an additional K120 crore to the families, the government has decided to deduct the amount from the plan fund allocation to the corporation as instalments. It has already taken K10 crore from the plan fund in the last couple of months. However, corporation officials have shot off a letter to the government asking for an exemption. They are yet to receive a reply.

Now we are on Telegram too. Follow us for updates
TAGS
Brahmapuram waste treatment plant Kochi