Gone are the days of a dilapidated Marine Drive that was ignored and ill-maintained by authorities.

KOCHI: The renovated Kochi Marine Drive is all set for inauguration. Under the project taken up by Cochin Smart Mission Limited, the walkway has undergone a complete makeover with relaying of tiles, platforms for sculptures, new seats, an open gym, LED street lights and landscaping

Gone are the days of a dilapidated Marine Drive that was ignored and ill-maintained by authorities.
The Cochin Smart Mission Limited’s (CSML) renovation project has provided a facelift to the famed tourist spot.The refurbished walkway with tactile tiles, new seats, landscaping and open gyms will be inaugurated by Local Self-Government Department Minister A C Moideen on February 27, Saturday.

The 2.4-km-long Marine Drive walkway is being developed under the Rs7.85 crore project to improve pedestrian zones and open spaces in Kochi. Currently, renovation of the 700m stretches on the southern portion of the walkway from the side of Abdul Kalam Marg has been completed. “We have developed the stretch with facilities like a kid zone and open gymnasium. Sculptures will be erected at dedicated spaces on the walkway at a later stage. We have also set up an event space at the entry point of Abdul Kalam Marg from Abraham Madamakkal Road with an option to host cultural events in future,” said the CSML spokesperson.

Under the project, the agency has relaid the existing drainage system with a vertical curve drainage system and installed 20 dustbins within every 200m of the pathway. While tile relaying works are progressing at the remaining stretch, work near the proposed High Court water metro jetty will start only after the completion of the ongoing work.Collective effort bore fruitThe entire renovation work began after an arduous legal battle led by activist Ranjith G Thampy in July 2019.

“It is immensely satisfying when our collective effort bears tangible results. I have been a regular user of the walkway for the past 20 years and it pained me to see the official apathy of Greater Cochin Development Authority (GCDA) and Kochi Corporation in its maintenance. It took numerous rounds of intervention from the Kerala High Court which included direct inspection of amicus curie to find a perennial solution to the issue. We have managed to evict illegal hawkers and set up sewage treatment plants in apartments nearby through court verdicts,” he said.

However, the activist has clarified that work is pending. “Though the walkway renovation is almost over, officials need to address the issue of public toilets in the area. Besides, a system to maintain the walkway after the expiration of CSML’s tenure should also be considered with equal importance,” he said.Meanwhile, CSML officials have pointed out that new toilets will be built soon.

“We are constructing two toilets near Kettuvallam bridge. A container toilet under Cochin Shipyard’s ‘Klean Toilet’ scheme, a disabled-friendly toilet chain made out of unused containers, will also be constructed on the walkway. Our contractor will maintain the walkway for the next three years and will then hand it over to GCDA,” said the official. CSML is also open to residents’ associations who are willing to maintain the walkway in future, the official added.

Container toilets across Kochi
‘Klean Toilet,’ is being expanded across the city. Implemented by Better Kochi Response Group (BKRG), a Kochi-based NGO, by utilising the CSR funds of Cochin Shipyard, the facility’s latest outlet inaugurated by Mayor M Anilkumar on Tuesday. “We hope to set up the facility at 20 different locations within a year,” said S Gopakumar, chairman. The agency is using biodigesters to manage sewage waste. 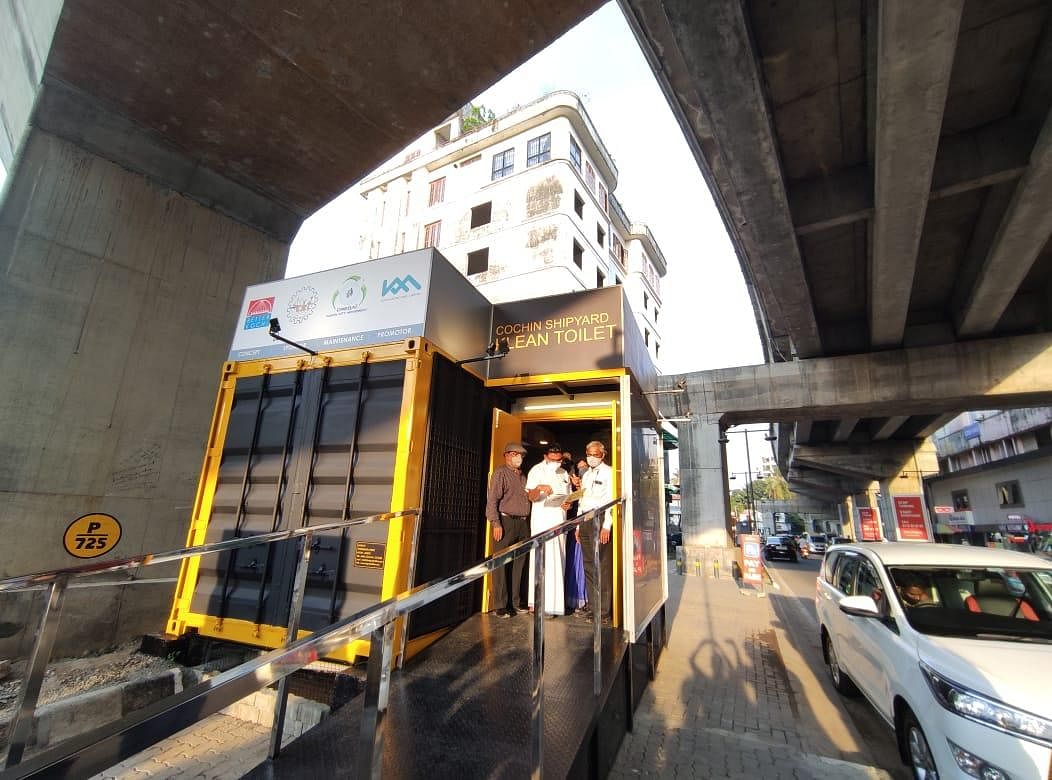 Now we are on Telegram too. Follow us for updates
TAGS
Marine Drive Kochi Marine Drive