KOLKATA: It was a rude shock for 24-year-old Rajashree Chattopadhyay on the lazy Sunday morning of October 16 when she found her Facebook status displayed on a 5.5 ft by 4 ft hoarding near her house with the caption ‘Dhikkaar’ (Shame) to the left of the billboard.

The 'Citizen’s Forum' of Nagerbazaar in Dumdum locality of Kolkata had put up the M Tech first-year student's Facebook status of Oct. 14 in which she slammed chief minister Mamata Banerjee for organising a parade of 39 Durga Puja pandals that supposedly upheld and promoted the culture of Bengal on the global stage.

“Bhashane Horibol! Mananiya aapni chuloy jaan!” the status read, with the hashtag #bhasanAtRedRoad. This was the Rajabazar Science College student literally asking the chief minister to ‘go to hell’ for organising such a programme. She went on to explain in her comments that when the state is facing high unemployment and malnutrition rates, so much taxpayer’s money was being wasted on processions and that if the parade truly represented the entire state, Durga Puja pandals from all the backward regions of the state ought to have also gotten a place in it.

In an interview with New Indian Express, Rajashree Chattopadhyay explained, “As a citizen of the country, I have every right to protest under Section 19 (1) (A). There are no ‘Citizen’s Forums’ in our locality. Women who saw me grow up and are now Trinamool supporters heckled and threatened me for putting up the status.” 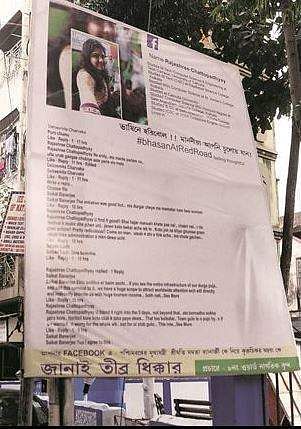 The status had not gone viral, garnering only some 219 likes and 5 shares. So what made her detractors decide to shame her publicly? “I am a local committee member of the Democratic Youth Federation of India (DYFI), a communist youth organisation, and campaigned for CPM candidate Palash Das in Dumdum constituency in the Assembly elections by sporting a party T-shirt and distributing leaflets. Since then, I have been mapped. They were looking for an opportune time to malign me,” she said.

The banner has since been taken down on the insistence of the Dumdum MLA and IT minister Bratya Basu. Local councillor Avijit Mitra had earlier accused Rajashree of putting up the poster herself for propaganda. “They did not even have courage to write that Trinamool Congress put up the poster in the guise of some non-existent ‘Citizens Forum’,” Rajashree said.

Facebook posts have a history of triggering the umbrage of Trinamool Congress leaders. back in 2012, Jadavpur University professor Ambikesh Mahapatra was arrested for circulating a cartoon of Mamata Banerjee on social media.