Heavy rains lead to waterlogging, house collapse and landslide in Mumbai, one dead

BMC has also issued the red alert and expected heavy to heavy rainfall in the next 24 hours in Mumbai.

MUMBAI: The city and its suburbs received heavy rainfall on Monday in which one person died due to house collapse. The rains also resulted waterlogging in several low lying areas and landslide incidents.

"The waterlogging incidents happened because there was a high tide in the sea," says BMC.

BMC issued the warning to people not to leave the housess except for emergency and essential services because of rising water level.

It has also issued the red alert and expected heavy to heavy rainfall in the next 24 hours in Mumbai. 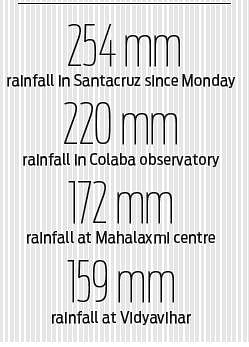 The seven house collapse incidents were reported in the western suburb, two in the city and one incident in the eastern suburb of Mumbai.

In the house collapse incident, one 26-year-old trapped in the debris of the houses and died while taking to the hospital while two were rescued and one yet to be identified.

The landslide was reported at Malad.

While total of ten shot-circuits incidents reported in Mumbai that includes five in south Mumbai, one in eastern suburb and four in the western suburb. However, no casualties were reported in tree falling and short circuit incident.

Due to the heavy rainfall, in the morning the mainly western train services were interrupted while Harbour line services were completely stopped. All lines services were later restored. The BEST, public transport also diverted its buses on Monday.

Besides, no flight cancellation reports were registered. The BMC chief Iqbal Singh Chahal and mayor Kishori Pednekar visited various chronic spots in Mumbai and inspected the rescue and pumping out the excessive rainwater work which was done by the BMC.

The Mithi river that caused the deluge on July 26, 2005, was also overflowing on Monday but it did not cross the danger level because of speedy pumping out the rainwater. The BMC had installed many hydraulic pumps to pump out this rainwater in the sea.

More from Mumbai
Now we are on Telegram too. Follow us for updates
TAGS
Mumbai rains Red Alert house collapse Mumbai suburbs BMC