A Faisal push for school libraries

S L Faisal, a librarian with the Kendriya Vidyalaya, Pattom has been recognised for his contribution to national development of school libraries.

THIRUVANANTHAPURAM: He realised the possibility of digital technology and pioneered the diversification of traditional library into e-books and blogs almost a decade ago. In recognition of his achievements, S L Faisal, a librarian with the Kendriya Vidyalaya, Pattom, has now been conferred with an international recognition. 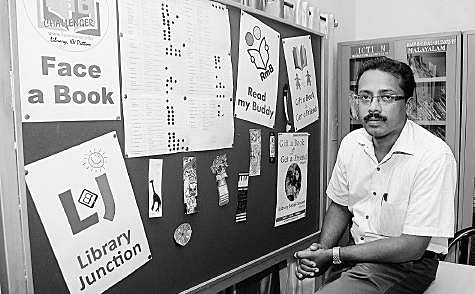 After pursuing his Masters in Library Science at Kerala University in 2003 and bagging the first rank, Faisal joined the Kendriya Vidyalaya Sangathan. He was given his first posting in strife-prone Baramulla in Jammu and Kashmir. Instead of showing reluctance in working in a troubled area, Faisal took it up as an opportunity.

“Though it was a small school, it also gave me huge opportunity to come out with many innovations in the library. In three-and-a-half years, we were able to transform the school library of KV, Baramulla, into one of the best libraries in the Valley,” Faisal said, during an interaction wtih ‘Thiruvananthapuram Express’

What Lies ahead
Faisal is currently pursuing his PhD at the University of Kerala and his topic of research is school libraries in India. The research will focus on how libraries have contributed towards achieving academic excellence in schools, especially in schools under the  Kendriya Vidyalaya Sangathan,” he said.
The librarian feels that the total transformation of books into e-books would happen eventually. “It cannot be called a book-less future. The books will only take new shape and form. We just need to be prepared for it,” he says.

Innovations Galore
In 2007, Faisal came back to the capital and joined KV, Pattom. At a time when social media and micro-blogging were taking baby steps, the librarian set up a blog on wordpress www.librarykvpattom.wordpress.com  The school libraryÂ’s blog, considered the first of its kind in India, has received more than 50 lakh hits till date.

In 2008, Faisal automated the KV Pattom library, which became the first fully automated Kendriya Vidyalaya library in India. The library has an excellent collection of online and offline resources and a variety of user services.
In 2010, Faisal launched an online academic social network, ‘Library Junction’, with more than 1,000 students and a group of teachers as members, with the main objective of collaborative learning and knowledge sharing.

Other innovative projects and experiments include ‘Face a Book’, a summer reading challenge;  ‘Gift a Book and Get a Friend’, a social responsibility initiative; ‘Read my Buddy’, a collaborative reading programme aimed at transforming moderate readers into fervent readers through mentoring by peers and teachers,  Home Works and Assignments Online, the first online home work portal; My Dear Book, website of student’s book reviews; InfoLit India, an information Literacy initiative and LibZine, an e-magazine were some of his other pioneering works.