One such initiative is the Dosti Music Project, a digital album  comprising of 12 songs composed by 25 m sicians from India, Pakistan and the USA. The album was recently released under the label of Found Sound Records — the label division of Found Sound Nation, an initiative that brings together musicians from across the globe. 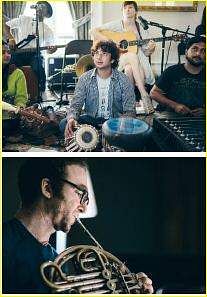 Music that speaks
During a month-long recording process in the US that took place in 2015-2016, it didn’t take long for the musicians (from ages 19-35) to get in sync with their respective instruments. For some it was a case of reconnecting with lost roots, while for the others it was an opportunity to learn new sounds. Kyla, however, saw it as a chance to make music that can send a message.

“Songs throughout history have inspired political resistance movements, just as music has served as a force that binds and strengthens a community,” notes Kyla, taking the example of India and Pakistan, whose complicated bilateral relations belie their centuries-old common roots in sufi and qawwali music. “Even though the Dosti musicians were steeped in this shared tradition, none of them quite anticipated the significance that this commonality would take on during recording,” she reveals.

Night and day
Keeping in mind the kind of emotions they evoke, the 12 songs were divided based on when they are meant to be heard, be it during the ‘Day’ or the ‘Night’. “Most of the Night songs feature contributions by Zeerak Ahmed (aka Slowspin), whereas the Day songs feature more group collaborations, like Homecomings, featuring Mirande Shah from India and Imran Fida from Pakistan,” says Kyla.  There is also Gift, by US-based folk-pop artiste Abakis, and Kyla’s personal favourite, Majare, sung by sarod player Debasmita Bhattacharya. “We re-harmonised it along with Danish Khawja, a guitarist from Lahore,” she adds.

Looking ahead
Besides these 12, there are 19 other tracks that were not chosen for the main album, we learn. “They too are outstanding pieces of music which we hope to release as a B-side accompaniment to the album soon,” says Kyla, adding that the main album will be released as a vinyl record next month. “We are constantly looking out to create cross-cultural collaborations that meaningfully bridge cultural divides. Through the music we are producing and releasing under Found Sound Nation, I believe we are redefining what global or world music sounds like,” she says.
Details: dostimusic.org
karan.pillai@newindianexpress.com
@karan_pillai