With the CPM local brass putting its foot down, the row over the award ends. Chirayinkeezhu Pouravali will honour Sarada, the grama panchayat will fete actor T P Madhavan

THIRUVANANTHAPURAM: T P Madhavan or Sarada? The row over the Prem Nazir Award seems to have ended in a compromise. The Chirayinkeezhu grama panchayat and the ‘Chirayinkeezhu Pouravali’ - both controlled by the CPM - had been at loggerheads as to who should be the winner this year. With the party leadership putting its foot down, a solution was thrashed out.

Sarada - a veteran who has acted in numerous films opposite Prem Nazir - will receive the Pouravali’s award, while Madhavan - a notable presence in Malayalam cinema for over four decades - will receive the panchayat’s award. In fact, he was selected by the local body last month. 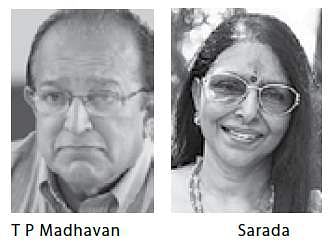 The Chirayinkeezhu panchayat committee had stirred a hornet’s nest by announcing the selection of Madhavan for the award on July 25. However, the annual organisers of the award - the Pouravali -  objected to it and decided on Sarada instead. Incidentally, the panchayat allocates the prize money while the Pouravali customarily decides the winner and organises the ceremony.

Addressing a press conference at Chirayinkeezhu recently, the Prem Nazir Commemoration Committee announced the award function will be held at the Sarkara Maidan on August 15. According to committee chairman R Subhash and general convener S V Anilal, Sarada will receive a cash award of Rs 75,000 along with a statuette designed by B D Dethan and a citation. Tourism and Cooperation Minister Kadakampally Surendran will present the award - the 12th in the series.

Panchayat president S Deena was also present at the press conference. An inmate of Gandhi Bhavan in Pathanapuram, Madhavan will receive the panchayat’s award and Rs 50,001 originally announced by the panchayat committee.

Blame it on delay

The confusion over the Prem Nazir Award was reportedly caused by the delay in declaring this year’s winner, according to sources.
The award is usually given away by the Pouravali on January 16, the death anniversary of Nazir who hailed from Chirayinkeezhu. This year, the Pouravali had failed to announce a winner, despite two reminders from the CPM-led panchayat committee.

This reportedly led to the panchayat calling a meeting and unanimously deciding on T P Madhavan. The official announcement was made on July 25. As per this decision, Madhavan would receive Rs 50,001 as cash award. This enraged the Pouravali, which apparently saw the panchayat action as an encroachment upon their turf.

Its members objected and chose Sarada instead. According to Pouravali members, the panchayat has the right to sanction the prize money, but not to choose the awardee. The move to dump Madhavan also drew criticism from the Congress members of the panchayat, who had voted for the actor. Earlier winners include Bharat Gopi, Balachandra Menon, K J Yesudas, Jayaram, Thilakan and Manju Warrier.