THIRUVANANTHAPURAM: In the surge of acts that took over the Malayalam indie music scene, there is a niche that is still unoccupied—all out feminine rhythms. The state gets a dose of just this through the two-month-old Drutaah. This six-piece all-women ensemble led by vocalist Parvathy Ravikumar alongside Krishna Kala, Mirza Mohan, Arya K S, Alina Shanine and Gayathri Satheesh, hope to change the tune to which the contemporary society is dancing, through their songs.

“So many women with a great passion for music are tied up in social constraints. When I tried for an opening in the industry it was evident that money and power has a major influence in creating a name. This is why I approached drummer Krishna Kala at Sound Engineering Academy in Thiruvananthapuram to create a platform to bring under-rated artistes to the mainstream,” says Parvathy, on the formation of Drutaah. The frontwoman sifted through the entire state for nearly ten months to find musicians to form an ensemble which would be a strong statement from today’s young women.

Honouring lineage
It’s not just the ideas they stand for that makes the band one of a kind. Trained under the renowned music   academician   K    Omanakutty Amma, Parvathy picked her bandmates who’ve learned with prestigious institutes like Trinity College London. Much like Parvathy herself, Drutaah also consists of artistes trained in Indian classical traditions which will help them drive the style of music they want to create. 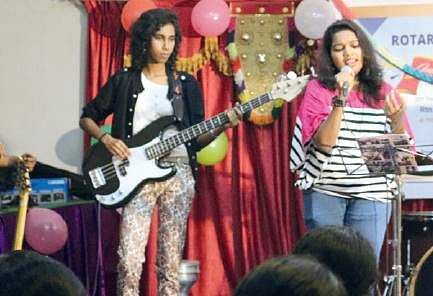 “Drutaah focuses on creating classical fusions with western structures. We’re also working on incorporating Kathakali-inspired imagery into our tracks as a tribute to my guru Omanakutty Amma,” informs Parvathy,  adding that the outfit has completed the composition of two yet-to-be-titled originals. Currently, they also perform raga-based mashups of numbers from famous composers like A R Rahman.

Reaching out The band wishes to traverse
beyond the usual roles of a musical ensemble and carve out a space within the social fabric of Malayali life. “Beyond creating a platform for women who could never showcase themselves, we also plan to raise money for underprivileged cancer patients from our launch concert in early August and regularly promote blood donation drives,” explains the artist.