A house of memories

Christo Pastorum Principi - the papal decree - along with the cylindrical case in which it was sent, is among the draws at ‘Beth Dukhrone’ thrown open to the public at the Bishop’s House, Pattom

THIRUVANANTHAPURAM: The papal bull, in neat, cursive Latin print, is dated June 11, 1932. The Syro-Malankara Catholic Church had entered into communion with Rome two years before, but it was on this day that Pope Pius XI established the Archdiocese of Thiruvananthapuram and the Diocese of Thiruvalla. Christo Pastorum Principi - the papal decree - along with the cylindrical case in which it was sent, is among the draws at ‘Beth Dukhrone’ (Syriac for House of Memories) thrown open to the public at the Bishop’s House, Pattom, on Tuesday.

In many ways, the museum is unique. It holds the personal belongings and memorabilia connected to the church’s first three metropolitans; Geevarghese Mar Ivanios who founded the church in 1930 by breaking away from the Malankara Orthodox Church, and his successors Benedict Mar Gregorios and Cyril Mar Baselios. Also on display are letters from the Vatican and documents related to the ‘reunion’ with the Catholic Church. 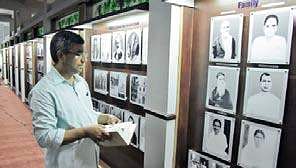 “The museum denotes the first three epochs of our church. It was the idea of Cardinal Baselios Cleemis, the current head. Otherwise the sacrifices made by them for the church would be forgotten,” Fr John Kochuthundil, chancellor and vicar general of the church, said. From old bibles that belonged to the archbishops to watches, liturgical vestments used during Holy Mass and special occasions, old coins, gramophone records, chalices, rare photographs and even the dentures used by them, the museum has quite a few interesting exhibits.

The first section is dedicated to Mar Ivanios, who, incidentally, is in line for a sainthood. The British Indian passport used by Ivanios, his ‘Masnapso’ and ‘Mudithoppi’ (bishop’s headgears), the myters and pectoral crosses gifted him by the Byzantine church, the chalice presented to him by the Pope and the cassocks worn by him are part of the museum. So are his rosary beads, rings, pastoral staff, dentures, reading glasses and even a cyclostyle copier.

Scores of black and white photographs which record his visits abroad and his second book on Aramaic, the language used by Christ, add to the museum’s charm.
Dedicated to Archbishop Benedict Mar Gregorios, the second section features personal effects. Gregorios had studied theology and philosophy at the papal seminary in Kandy, Sri Lanka.

This section also holds an old gramophone record player, devotional records and a Philips radio used by the Archbishop. Epoch 3 covers the life and times of Cyril Mar Baselios, the first Major Archbishop of the church. “Work on the museum started three years ago. But the museum itself is the result of a 20-year-long effort,” Fr Kochuthundil said. Cardinal Baselios Cleemis inaugurated the museum.