The trawling ban enforced by the state government will begin from June 14 midnight and continue till July 31.

THIRUVANANTHAPURAM: The trawling ban enforced by the state government will begin from June 14 midnight and continue till July 31.Only traditional fishermen will be allowed to venture out into the sea during the ban. Boats from other states have been ordered to leave the harbours.

The Marine Enforcement Wing and the Coastal Police will be responsible for preventing boats from flouting the ban, said Fisheries Minister J Mercykutty Amma. Fuel pumps supplying diesel to boats will also be closed from June 14 midnight. 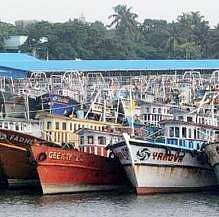 The 47-day trawling ban was enforced by the government since 1988 on an experimental basis for three years and became a regular feature since 1994. The  ban during the time of fish-breeding is enforced to sustain the oceanic wealth and traditional fishermen vouch for its effectiveness.

Extension demanded
Traditional fishermen under the Kerala Swatantra Matsyathozhilali Federation have demanded the trawling ban be extended to 90 days in the backdrop of dwindling catch.

General secretary of National Fish Workers Federation T Peter said a 90-day trawling ban during the spawning season was necessary to sustain fishing. The Kerala Matsya Thozhilali Aikyavedi urged the Chief Minister to join other states in enforcing a 61-day trawling ban. The ban imposed by the Centre between 12 and 200 nautical miles began on June 1.

State of the matter in Kollam
47-day trawling ban commences on Wednesday midnight
It coincides with the 61-day fishing ban of the Central Government in the Exclusive Economic Zone
Fisheries Dept issues six-point guideline to nine coastal district heads of the state
In Kollam district, Vadi near Thangassery has been identified as sensitive area
Kollam will have three rescue boats for addressing emergency situations
A sea rescue squad comprising 10 life guards will offer service during  ban
Marine Enforcement Wing’s 24-hour control rooms to be opened at Thangassery, Neendakara and Azheekal