A master plan has been drafted to increase the water-level in the Kaduvakkuzhi-Anappad-Machel canal in Kattakada constituency.

THIRUVANANTHAPURAM: The capital district the other day witnessed a massive people’s campaign to revive a canal. The six-km-long trek aimed to preserve the Kaduvakkuzhi-Anappad-Machel canal in Kattakada constituency was led by I B Sathish MLA and District Collector K Vasuki.

The canal originates from Kappukadu mountain at Poovachal and empties into Karamana river.
The watershed protection sojourn was attended by local body representatives, nine district heads of various government departments, student police cadets and NSS volunteers. Its aim was to come up with a conservation plan for the canal which was once a lifeline for thousands of people living in different panchayats. 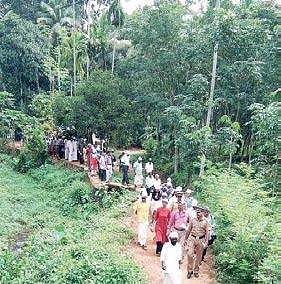 “The canal remains largely non-polluted except in some locations. SPC and NSS volunteers walked down the canal while the officials walked along the bank. Student volunteers removed plastic and other waste found in the waterbody,” Sathish said.

The journey began from Kaduvakkuzi on the border of Vilappilsala and Poovachal panchayats in the morning. It ended at Kalluvarambu in Malayinkeezhu panchayat by noon.
According to Sathish, the travel succeeded in creating awareness among the local population. “People’s participation is essential to make our conservation mission a success. A good number of residents on the banks of the canal talked to us and conveyed their willingness in participating in the programme,” Sathish said.

The official team found a couple of houses draining wastewater into the canal. It directed local self-government representatives to ask the houses to stop the practice.
Another finding was the need to conserve the streams that feed the canal. “Many of them have been reclaimed to build roads or houses and it is impossible to revive them. But we have decided to protect the remaining nine ones. This too will be carried out under the leadership of the local self-governments,” Sathish said.

Increasing water-level in the canal and nearby areas are the prime focus of the draft master plan prepared. Under the plan, minor earthen check dams will be built on the canal at every 200 m except at the meanderings. Gabion structures will be erected(cage-like structure filled with rocks) across the river in five spots downstream. Ordinary check dams will be built by MNREGS workers while the gabion structures will be erected by the Minor Irrigation Department.

“Minor earthen check dams are effective in raising the water level. On Thursday, student police cadets built one and afterwards the water level in the canal rose from 10 cm to over 30 cm. In due course it will help in increasing water level in the nearby areas as well,” said Land Use Board commissioner Nizamudeen A. Brushwood check dams (minor ones with local materials like logs) and gully plugs (a stone based system which allows water but blocks soil) will be erected at the joining point of nine streams. Protection works of streams are fully entrusted with local self-governments.

Now we are on Telegram too. Follow us for updates
TAGS
Kaduvakkuzhi-Anappad-Machel canal