Twelve out of 26 diamonds which reportedly went missing from Sree Padmanabha Swamy temple have been recovered.

THIRUVANANTHAPURAM: Twelve out of 26 diamonds which reportedly went missing from Sree Padmanabha Swamy temple have been recovered. The investigation agency probing the case of the missing diamonds said the gems were not stolen and they were only found to be misplaced. The value and antiquity of the stones were yet to be ascertained, officers said. The investigation was led by  IG (crimes) S Sreejith and the report has been forwarded to State Police Chief Loknath Behera. The DGP will soon hand over it to the Supreme Court. 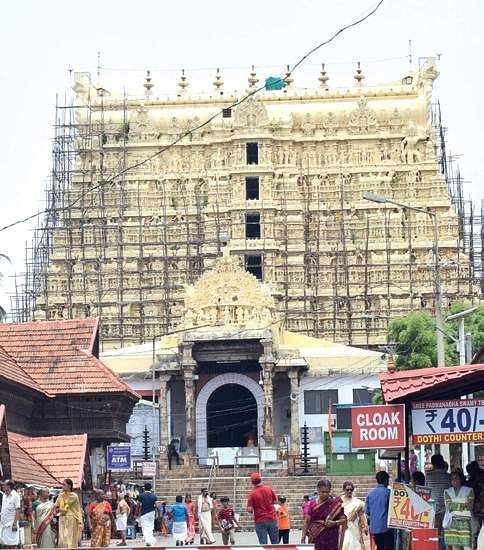 According to Crime Branch sources, the gems were recovered from various points inside the sanctum sanctorum. The gems might have fallen on the floor as the shelf got ruined due to age. Earlier it was reported the stones were stolen. The recovered valuables included the stones which were not documented in the temple records and the missing gems which was reported by amicus curiae earlier, officials added.
The missing of diamonds, which used to adorn the ‘naamam’ (forehead) of the idol, was brought to light in a report by the amicus curiae appointed by the Supreme court. The report was submitted in July.  Congress MLA K Muraleedharan had also brought this matter to the attention of the Assembly in its last session through an unstarred query. Chief Minister Pinarayi Vijayan had taken the matter seriously and informed the Assembly a crime branch investigation was in progress to locate the diamonds.

As per the report by amicus curiae,  stones are officially valued at over Rs 21 lakh and they suggested they were worth much more owing to their antiquity. On checking the Muthalpadi (temple treasurer) records, the amicus curiae found the “missing diamonds” were first mentioned in August 2015. They were again referred to in a report from the priest in March 2016. Apparently, an FIR was also registered in August 2016.

The amicus curiae, however, highlighted the administrative committee never sought an in-depth inquiry into the case of the missing stones and used ‘vague expressions’ to suggest the diamonds were only ‘damaged’, and not lost.  Initially, the Fort Police had registered a case of the missing diamonds based on a complaint lodged by former temple manager D Venugopal. The case was later handed over to Crime Branch.