The scarcity of granite was one of two reasons - the other being Ockhi cyclone and inclement weather in general - that had hit work on the Rs 7,525-crore Vizhinjam project.

THIRUVANANTHAPURAM: If things pan out, granite flow to the Vizhinjam port project site will start by the middle of this month so that breakwater construction, which had ground to a halt, can be re-started once curtains fall on the southwest monsoon.

Senior officials of the Adani Vizhinjam Port Pvt Ltd said they expected granite quarried from a number of mines in Thiruvananthapuram district to start arriving at the project site by August 15. Granite consignments from other districts are expected to start arriving by October. The scarcity of granite was one of two reasons - the other being Ockhi cyclone and inclement weather in general - that had hit work on the Rs 7,525-crore Vizhinjam project.

‘’We expect the flow of rock to start with 1000 tonnes per day by August middle and go up to 2000 tonnes,’’ an official with the Adani Group, the concessionaire of the project, said. The Adani Group requires 60-70 lakh tonnes to complete the work which is a major component of Phase I. Full-fledged construction on the breakwater, as well as dredging of the channel approach to the port, are expected to re-start only after the current monsoon season is over.

Rock consignments from a number of quarries in Thiruvananthapuram and Kollam district will start arriving by barge by October. As per the proposal, the port will require a 3.1 km-long breakwater. Although the breakwater construction had kicked off on an encouraging note, work had to be halted at 600 metres after rock supply trickled to a stop. Attempts to procure granite had failed following local protests which prompted the government to intervene in the matter. Attempts to procure granite from neighboring Kanyakumari district in Tamil Nadu also had not worked out, though the proposal has not been dropped.

At present, the Adani Group has identified quarries in Thiruvananthapuram, Kollam and Pathanamthitta. The Chief Minister had instructed the collectors of the three districts to expedite measures. NoCs have been obtained for quarrying in 11 privately-owned locations in the three districts, including six in the capital. While some have been provided with the NoC on condition that half the quarries rock will be earmarked for Vizhinjam, some are meant for exclusive supply for the project. 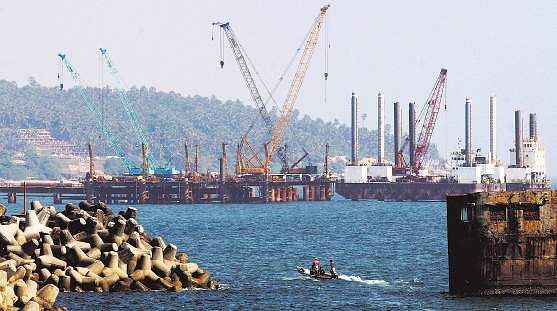 At a time when local protests have stalled rock quarrying for the Vizhinjam project, the Viszhinjam Motherport Action Council (V-mac), a local group batting for the project, claims to have identified a site where the people are not opposed to quarrying. The group, in a Facebook post on Wednesday, urged the authorities to explore the possibility of mining granite from a 10-acre plot at Koliyoor. ‘’The plot is owned by a number of people, and the local people are also not averse to mining,’’ said V-mac general convener Elias John. Although the government had given the Adani Group the go-ahead to rope in quarries, the first attempt at Nagaroor in Thiruvananthapuram district was hit by local protests.