Skate of the art

THIRUVANANTHAPURAM: Indian streets are crowded. Many Western street culture elements like busking and skateboarding find difficulty in establishing themselves in the country because of this reason. But, the confidence of people like E Francis Kurian aka Franky, the founder of Merkabah Boards, saying that “we find our own ways even though there’s no friendly space,” is how things work out here. “It all started by viewing boards as a non-judgemental platform for art. 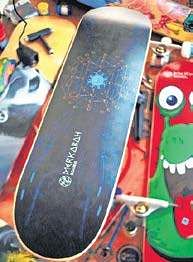 A regular skater will need decks (the plank that is used to skate on)  but in India getting hold of one is as expensive as buying a new board,” says Franky, who’s primarily a visual artist who has worked behind the camera on blockbusters like Mayaanadhi. We catch up with this young entrepreneur whose skateboarding endeavour is in its final development phase, ready to get Kochi rolling.

In a city with no dedicated parks, one might wonder what’s the impetus for a startup like Merkabah. “Kaloor stadium is the hub for skaters. From when I started skating nearly half a decade ago, we now have some 45 people in the community. At least a dozen of them are under 16 and it’s encouraging to see many of them pooling in to buy a shared board,” informs this 22-year-old.

Realising that there are hardly any exclusive manufacturers for these skating paraphernalia, this youngster visited production units in China to assimilate the procedures and even identified local timber that can substitute maple wood used for decks in the West. “I’ve looked at popular varieties like teak and finally decided to go with pinewood which doesn’t crack easily,” says the manufacturer, whose cruisers even take quirky shapes like that of a coffin, for instance. These custom products bring together locally-sourced material like fasteners and larger diameter tyres (imported from China) which are best for surfing Indian roads.

As the digital and handpainted designs on their curated shortboards are growing in popularity on Instagram (@merkabahboards), the youngster is already venturing into designing bespoke  longboards.
“We’re wrapping up our registration procedures. In a couple of months, we will launch with an event at Cafe Papaya which will also feature boards designed by popular Canadian artiste Chris Dyer and hope to organise workshops on street surfing,” Franky winds up, expressing the hope for a park which will trigger associated engagements like BMX and freestyle dancing.