THIRUVANANTHAPURAM: “I wouldn’t have come today but the pain was too much to bear. Else, I would have refrained from coming during the strike. The rush to get an OP ticket was really long, unlike other days,” said  Subhalakshmi T who arrived at the General Hospital even as medicos everywhere went on a protest against the National Medical Commission Bill on Tuesday.

Dramatic scenes unfolded in the morning hours at the hospital as a woman was denied consultation at first by a doctor. The woman, suffering from fever was second in line for treatment. She broke down after the doctor who was about to meet her was asked to join the token strike by her colleagues. However she was later given assistance, said hospital authorities. “As soon as we came to know that the woman was sick, she was rushed to the casualty and medical aid was administered,” said Dr Vanaja, superintendent, General Hospital.Patients were literally left in the lurch as medical services were partially hit following the token strike. Responding to the clarion call of the Indian Medical Association (IMA) to strike  against the tabling of National Medical Commission Bill 2017, the doctors at the General Hospital stayed away from work for one hour. 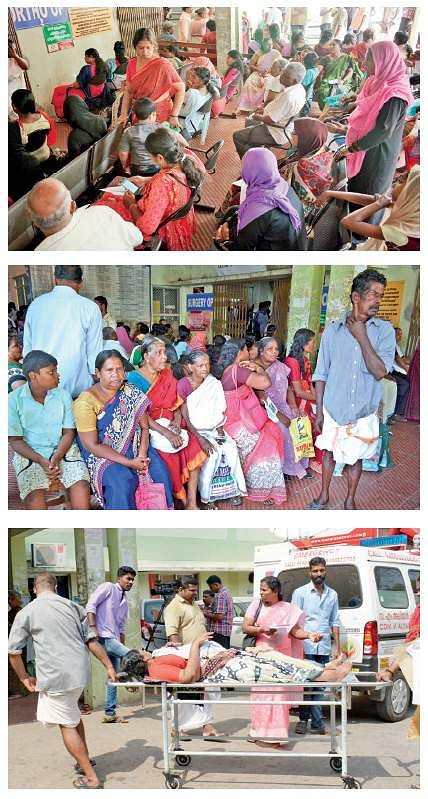 The token strike from 9 am saw doctors wear protest badges against the bill and strike work for an hour. Casualty services were not affected. Around 80 doctors joined the strike. Being one of the main nerve centres of medical care for Thiruvananthapuram, any decision to strike even for an hour, is bound to create tensions. The issue was severe on Tuesday as many patients were delayed treatment. The Outpatient (OP) ticket counter which opens around 8 am witnessed serpentine queues that moved at a snail pace.
On an average, 2,000-3,000 outpatient tickets are issued daily, according to hospital authorities. Since

Tuesday was a state holiday, there was additional rush at the hospital. The crowd burgeoned in front of the outpatient department of all the major medical wings. The strike further compounded the worries of the patients who were kept waiting for hours to get their treatment. “Normally we don’t have to wait for such a long time. But today we waited for more than an hour to even get an OP ticket,” said Shakeela Beevi, a native of Beemapalli who accompanied her son to the hospital. The sentiment was echoed in front of all medical departments as the number of patients swelled and medical assistance got delayed.

Meanwhile, the authorities maintained that everything was done to ensure that no patient was left unattended. “The outpatient treatment usually gets over by 1 pm but today it will end only at 3 pm. Even while striking we had ensured that the patients will not be put in inconvenience. The casualty department kept functioning during the strike and five doctors were deployed there instead of the usual two,” said Dr Vanaja, superintendent, General Hospital.

“We only got to know of the strike when we reached here. On top of waiting in the queue for a long time, we are asked to wait further to get the tests done. They are putting the blame on the equipment now,” said Athira M who had accompanied her grandmother to get her hearing tested.

The IMA had exhorted for a dawn-to-dusk nationwide medical strike. The strike was in protest against the centre’s National Medical Commission Bill 2017 which attempts to replace Medical Council of India (MCI) and enable alternative medical practitioners registered under AYUSH to practice modern medicine after completing a ‘bridge course’. However the strike was called off in the afternoon after the union government referred the Bill to a Parliamentary Standing Committee.