Bringing the past to the present

The year 2018 marks the 200th anniversary of a historic Neetu issued by Travancore.

THIRUVANANTHAPURAM: The year 2018 marks the 200th anniversary of a historic Neetu issued by Travancore. Issued in 1818, the Neetu asks the Diwan to pay 500 ‘panams’ to a woman named Viramma who was refused permission to commit ‘Sutee’ as Travancore did not countenance such a practice.

A copy of the document was on display at an exhibition organised by the Departments of Archives and Archaeology at Napier Museum on Friday in connection with the Loka Kerala Sabha summit. Copies of a number of similar memorable and groundbreaking documents were on display at the exhibition which lined the footpath of the museum campus. The declaration of 1865 concerns the wearing of upper clothes and performing certain services by certain classes. Or take the one issued in 1817. It concerned the permission given for using roofing tiles for houses and shops in Travancore. 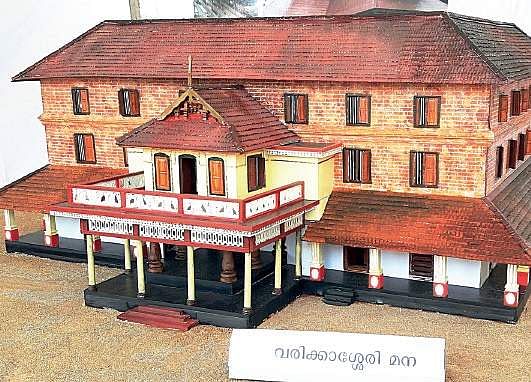 Through another vilambaram, in 1818, Travancore removed the prohibition ‘on wearing gold ornaments by the Sudras, Ezhavas etc.’ Copies of the Temple Entry Proclamation, and an application submitted to the Diwan for a licence for the newly-formed SNDP Yogam, and the historic 1865 declaration banning slavery are part of the exhibition.

The archaeology stall has on display curious utensils, instruments and weapons from the past such as the ‘Omkaramani’ and Majra (Ilathalam) used by Buddhist monks and a ‘Chitravadhakkoodu’ which was used to cage and hang convicts in public places.

If you’ve seen ‘Devasuram,’ might remember it. It’s been a notable part of other films as well. The Vasthu Vidya Gurkulam, Aranmula, has now created a scaled model of the Varikkassery Mana of Ottapalam. The miniature, done in multi-wood, is on display at the gurukulam’s Loka Kerala Sabha stall at the Museum. “It’s a traditional ‘Naalukettu’ but has three storeys,” points out A B Sivan, a faculty of the Gurukulam. ‘Diksoochi,’ a wooden instrument used to determine directions, scale models of the Areeparambu Mahadeva Temple and a ‘Naalukettu’ in match wood and murals on canvas are part of the exhibition.