Tuck into a delectable fare

THIRUVANANTHAPURAM: People arrive here in hordes and the dishes are wolfed down in minutes. And their tribe is only growing, one big family, united in their love for good food. This is what happens when social media literally celebrates a hotel. With more than one lakh Facebook group members, the Kerala Hotel in Akkulam is a force to reckon with and has become the latest sensation with its grand line-up of dishes and affordable rates.

It all started with the hotel’s debut in social media. And then there was no looking back. “Earlier the publicity was only through word of mouth,” says Manoj Manoharan who helps his father N Manoharan run the shop. Ever since the food items got featured in Facebook, foodies streamed in from diverse quarters. “Earlier I used to give publicity via various food groups on Facebook.

I used to share the day’s menu and the different dishes and the response was immense,” he says. It was in December 2017 that he started a group solely dedicated to the hotel. Within six days, the group members surged to one lakh. And now the group boasts 1,28,000 members, no small feat for a hotel which is just one year and three months old.

This thatched eatery rests on the roadside and wears an unassuming look. But it infuses into its surroundings a highly overpowering aroma of myriad dishes and offers a cozy nest to indulge in a grand fare of dishes. Modelled in the form of a thattukada, the number of people visiting the hotel has leapfrogged with people from across the globe dropping by hearing rave reviews in social media.

‘Then Mozhi’ is the latest fad in the group. It has earned its place with the ‘Kabali’, ‘Aadu Thoma’, ‘Miss Kerala’, ‘Bilal’, ‘Six-Pack Chicken’, ‘Chicken Chackochi’, ‘Chicken 47’ and the like. These have been the buzzwords the group for some time. They are the dishes christened with love by the netizens. Dishes born out of experiments in the kitchen are shared in its Facebook group where they are christened by netizens. 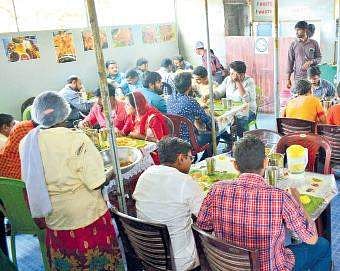 Visitors’ reviews are shared with the same intensity as one would tuck into the delectable cuisines in Manoharan’s shop. So much so that the dishes became instantly popular among the NRIs. “I have many customers who come here directly from the airport. We have special packages for them. The ‘idi irachi’ is tailor-made for them and many take it overseas,” says Manoj.

KH, as the shop is fondly called, is all about special packages, discounts, and contests in their Facebook group. Packages tailor-made for students, expatriates, a regular discount of 5-7 per cent for all, 6-10 per cent discount for its Facebook community, free salad for senior citizens, free food to those who cannot afford, the list is endless. Every week, contests are held in the group wherein the winner gets a signature dish from KH.

A vast array of seafood and meat dishes are served. A fresh spin is added to all the dishes and thus you have a burger made from parotta and beef! No food is refrigerated and what is left is given for free to those who cannot afford, Manoj says. Affordably priced meals which carry 16 dishes, ‘pothichoru’ with 20 dishes, ‘Kizhi Biriyani’ are some of the irresistible fares here.Second helpings are met with cold stares at most hotels but in KH one needn’t worry about that, says Manoj. “There is no limit to the amount of food served. All I tell them is not to waste food,” he adds. The hotel which opens from 12:30 pm closes at 10:30 at night and remains closed on Sundays.