KSRTC deciding to allocate two Rajadhani and one JNNRUM bus with route numbers exclusively for Technopark.There were complaints about how the lack of numbers for bus routes was adding to the travel woes of non-Malayali techies

THIRUVANANTHAPURAM:Finally, the techies of Technopark, including those from other states, can heave a sigh of relief with the KSRTC deciding to allocate two Rajadhani and one JNNRUM bus with route numbers exclusively for Technopark.

Express had earlier reported how the lack of route numbers for buses from and to the Technopark was adding to the commuting woes of non-Malayalis in the IT park. At present, all KSRTC buses display only route names, that too in Malayalam. 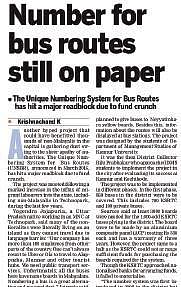 Three non-AC buses have been allocated for three busy routes, Thampanoor- East Fort- Enchakkal- NH bypass- Technopark, Peroorkada-Pattom-Kesavadasapuram -Ulloor- Sreekariyam-Technopark and Neyyattinkara- Balaramapuram-Vizhinjam- NH bypass-Technopark. Of which, the first route has been allotted for train passengers coming from Nagercoil heading to Technopark and VSSC. This is for the first time that this route has been introduced. Though the other two routes were earlier allotted, the KSRTC had to cancel it owing to financial crunch.All the services started plying on Monday.

According to G Anilkumar, KSRTC executive director (operations), the move is aimed at reducing the travel woes of techies. "Three buses in major routes with numbers have been introduced from last Monday. A representation of techies had approached us seeking restoration of the cancelled services. However, the implementation of route numbering system will take place only later as it is still in discussion stage", said Anilkumar.

Yogendra Jajapuria, a Uttar Pradesh native working in an MNC at Technopark, thanked the KSRTC for allotting numbered buses to the IT park. "This will be a major help as we don't have to depend on anyone else", Japauria said.

Currently, the Technopark, phase-I, II and III houses more than 10,000 techies from other states. They had raised apprehensions about the lack of route numbers as all buses display route names only in Malayalam.

V R Rahul, a techie, said several proposals were being mooted by the techies to the government to ensure a hassle-free transportation system for the employees.

"We have requested a 'She Bus' that plies during night time for the safety of woman techies. The KSRTC management has replied positively in this regard. If all things go well, more buses with route numbers will be introduced", Rahul said.

Techies have also started a Whatsapp group named 'Emerging KSRTC' wherein they coordinate with KSRTC officials to make KSRTC financially-viable. It is also aimed at easing the travel woes of techies. The group has 58 members so far.

"It is a group for the development of KSRTC. A WhatsApp group for coordinating with KSRTC officers is the need of the hour. This could enable more interaction. Several proposals such as 'bus pool facility', GPS system to identify the location of a bus in a particular route, She bus and so on are mooted. We hope to bring in changes", said Rahul, the group administrator.

* Thampanoor- East Fort- Enchakkal- NH bypass- Technopark ----- Route number RPC 695. Starting time- 8.30 am in front of Ganapathy temple at Thampanoor. Reaching time - 9.15 at Technopark. At present, no services in the evening from Technopark. According to KSRTC officials, a return service is expected soon.