Forget your chicken dish for now

It’s bad news for chicken buffs in the state capital.

THIRUVANANTHAPURAM: It’s bad news for chicken buffs in the state capital. The price of chicken, approximately Rs 105 a kilo at the beginning of October, has shot up to Rs 150 by Thursday, and retail traders are expecting it to touch Rs 160 by the time Deepavali arrives.

The phenomenon is such that the price has risen by Rs 6 to Rs 9 daily in the past one week alone, traders in the city said. 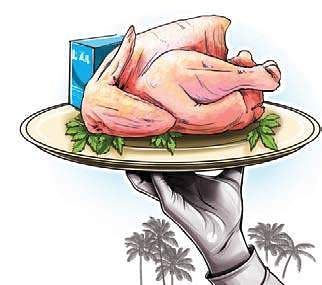 According to them, a combination of factors have contributed to the abrupt spurt in price: The arrival of large consignments from Tamil Nadu has slowed down to a trickle and local farms are struggling to meet the demand. Moreover, the operational costs of local farms are up due to the rise in fuel and transportation charges.

‘’Another factor is the increase in the price of chicken feed. That alone has risen from Rs 1350 for 50 kg to Rs 1600. Chicken prices normally go up in Thiruvananthapuram during Deepavali. But the price fluctuation is usually visible two to three days before the festival,’’ Salim, a retail poultry trader, said. His shop in the city was selling live broiler chicken at Rs 148 a kilo on Thursday and ‘Naadan’ chicken at Rs 230.

According to the traders, the current jump in price is unprecedented. Even when the price had gone up during Christmas-New Year 2017, it had not crossed Rs 130 a kilo. ‘’The fundamental issue here is that Kerala farmers have to depend on states like Tamil Nadu, Karnataka and Andhra Pradesh for eggs, feed and chicks. Poultry organisations in those states control the prices here. Neither our farmers nor the Kerala State Poultry Development Corporation (Kepco) has any say in it,’’ said Siyad M, member, Poultry Farmers and Traders Association of Kerala (FAT).As per FAT’s daily price index, the price of chicken in Thiruvananthapuram city was pegged at Rs 110 a kilo on October 7. In less than three weeks, it has shot up to Rs 150. There is speculation that poultry organisations in neighbouring states are taking advantage of the fact that large numbers of poultry farms in the state are yet to revive from the destruction caused by the mid-August floods.

Meanwhile, Kepco officials say that the price of dressed chicken in their outlets has not changed much in the past one year. ‘’Our 27 agencies in Thiruvananthapuram and 18 in Kollam are selling at Rs 158,’’ he said.

Paying a heavy price
With the price of chicken soaring, there is also the fear that restaurants would up the price of chicken dishes. So far, no collective decision has been taken to revise the rates, B Vijayakumar, district secretary, Kerala Hotels and Restaurants Association (KHRA), said. ‘’But KHRA does not control the rates. If the price continues to shoot up, individual establishments are likely to do it. But chicken prices tend to fluctuate depending on the demand and supply,’’ Vijayakumar said.