High security will be maintained during the final day of campaigning on Sunday till 6 pm.

THIRUVANANTHAPURAM: With just two days remaining for the state to go to polls, the city police have stepped up security to prevent untoward incidents and crimes. According to Kori Sanjay Kumar Gurudin, City police commissioner, over 2000 police personnel will be deployed at various parts of the city to ensure hassle-free polling at all booths. The city police have also sought the assistance of Tamil Nadu police. 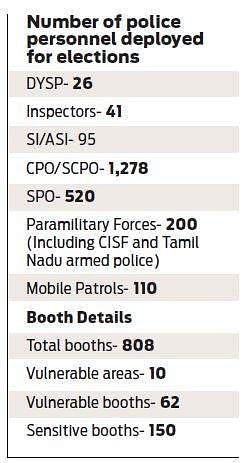 The entire security arrangement is divided into polling station deployments, group patrols, and law and order patrols supported by different striking forces, including CISF-1 COY and TN Police-1 COY. Vulnerable/sensitive booths are identified on the basis of various backgrounds such as cases/incidents that have taken place in the area during previous elections and political incidents in recent past. Central paramilitary forces will be deployed at such booths/buildings and webcasting (live camera recording) too will be enabled.

Detailed briefing of group patrols, law and order patrols, SHOs and sub-divisional officers were conducted on Saturday, including explaining their respective duties starting from the distribution centre to the polling booth and back. Police have been directed to be fair utmost and unbiased in their actions.

Two COYs of paramilitary forces have completed their familiarization of sensitive areas and registered anti-socials in the area. Police will intensify their action against anti-socials, criminals and troublemakers. Strict vehicle checks will be carried out to confiscate any illegal money, liquor, NDPS and arrest absconders.

High security will be maintained during the final day of campaigning on Sunday till 6 pm. Parties meet at important junctions in the city towards the end of their campaigning to show off their public support and strength. Such situations pose high chances of violations of law and order. All political parties have been called and warned by the police against such violations and have been advised to strictly abide by the Model Code of Conduct.

The city police are also prepared for post-poll incidents. The commissioner said, “Very elaborate arrangements have been made on the days of polling and post-polls to ensure free and fair elections”. “Police will tend to all issues promptly. Maintenance of law and order will be our top-most priority,” he added.