The land meant for taking over 67.68 acres belongs to 141 families and is adjacent to the LPSC Valiamala. 32 families still stay there. The project is likely to be finished in 2 to 4 years

THIRUVANANTHAPURAM: Giving a fillip to the expansion plans of the Liquid Propulsion Systems Centre (LPSC) Valiamala, the state government has given its nod for the acquisition of 67.68 acres.
LPSC oversees design, development and realisation of liquid propulsion stages for ISRO’s Launch Vehicle. It is also responsible for research and development, system design engineering and project management functions.

The land designated for acquisition belongs to 141 families and is adjacent to the LPSC Valiamala. 32 families still stay there. 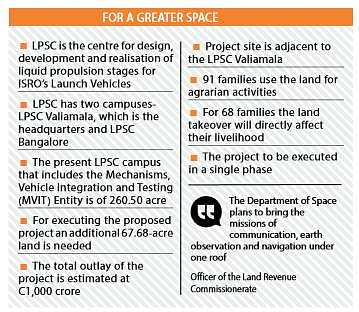 “Administrative sanction has been accorded after considering the Social Impact Assessment study report, Thiruvananthapuram District Collector’s report and the findings of the expert committee,” said an officer of the Revenue Department.

He further said the Social Impact Study (SIA) conducted by Rajagiri outREACH of Rajagiri College of Social Sciences, Kalamassery has found that the acquisition will require rehabilitation of 32 families. It also pointed out that the designated land is used by 91 families for agrarian activities. Of which 68 families have their direct livelihood from here.

“Considering the national interest the expansion of LPSC and subsequent acquisition of land is the need of the hour. As per the project concept note, through this, the Department of Space plans to bring the missions of communication, earth observation and navigation under one roof. The total outlay of the project has been estimated at `1000 crore,” said an officer of the Land Revenue Commissionerate.

At the same time, the assessment report of a seven-member expert committee headed by L Tharabhai, a former professor of Department of Sociology, Madurai Kamaraj University, has mentioned that the land acquisition process will have to be fast paced and the rehabilitation of families to be evacuated should be undertaken along with it.

In the case of others adequate compensation should be provided. The expert committee had also proposed that a condition will have to be included in the tender document so that the families who will be evacuated find job opportunities during the execution of the project.

Stay up to date on all the latest Thiruvananthapuram news with The New Indian Express App. Download now
(Get the news that matters from New Indian Express on WhatsApp. Click this link and hit 'Click to Subscribe'. Follow the instructions after that.)