MRU to start functioning at Medical College from today

According to the officer, though the laboratory had received the High Tension Electric connection in December, there was some problem with the three-phase power connection.

THIRUVANANTHAPURAM: THE much-awaited Multi-Disciplinary Research Unit (MRU) at the Thiruvananthapuram Government Medical College (GMC) will start functioning on Monday. The unit that facilitates research on non-communicable diseases in the state will operate from the newly-constructed Multi-Disciplinary Research Laboratory (MRL) at the GMC. Earlier, Express had reported that issues including failure to ensure power supply was delaying the commissioning of MRU and might affect its mandatory report submission to the Department of Health Research (DHR) under the Health Ministry.“Yes, there was a problem in ensuring power supply to the building. The problem is of a minor one and it has now been rectified,” said an officer with the GMC.

According to the officer, though the laboratory had received the High Tension Electric connection in December, there was some problem with the three-phase power connection. As soon as it gets noted, the Medical College asked HLL Lifecare Limited, which has been entrusted with the charge of construction of the building, to rectify the said issue.“We had identified some more issues and it will be rectified in a time-bound manner. In the case of MRU it will start functioning on Monday,” the officer said.

It was after much delay that the MRU will finally come into being. It is said that though a proposal of this kind was there from 2013, fund constraints had put the very project on the back burner.The laxity on the part of the Centre in disbursing the funds is also said to be a reason. It has been found that the state had last received a Central aid for the project in 2013-14. At the same time, it has been pointed out that the state had allegedly made a dereliction in meeting the specifications laid out by the DHR in setting up the MRU that resulted in the blocking of Central aid.

A member of the Local Research Advisory Committee (LRAC), which has been entrusted with the task of identifying the research priorities and projects at the medical colleges, said the MRU’s first priority will be to complete the two projects they are handling.

“Other than the two projects, the MRU had invited research proposals from various departments. Though about ten projects are in the pipeline, it could only be started upon the receipt of the Central fund,” said the LRAC member.

Meanwhile, GMC Hospital superintendent Dr M S Sharmad said the MRL and MRU will provide the much-needed thrust for the GMC to become a centre of excellence.

“The MRL will promote integrated multilevel research in various spheres. While it could undertake research projects of State Board of Medical Research it could also be upgraded into a recognised research centre of Kerala University of Health Sciences and a state-level nodal centre for faculty improvement programme,” said Sharmad.

For the construction of the four-storey MRL, the state government had sanctioned an amount of Rs 27.55 crore.As MRU is a Central project, the Health Ministry had offered assistance of Rs 5.25 crore. 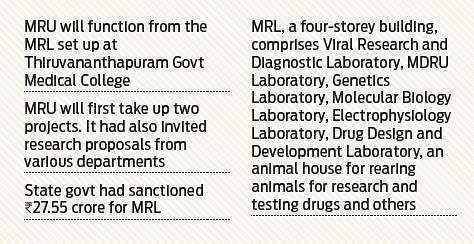 Now we are on Telegram too. Follow us for updates
TAGS
Multi-Disciplinary Research Unit