Taking up causes for a change

According to sociologists, people thrive to connect and use every opportunity to interact including social media.

THIRUVANANTHAPURAM : The 2019 #10YearsChallenge, which began on a humorous note, is turning more meaningful. Environmentalists, NGOs, activists are reversing the challenge the world over, drawing attention to the state of the earth and how much it is struggling to survive the test of time, over the past 10 years.  While the challenge attained new names like the #glowupchallenge, #howharddidageinghit, with celebrities taking it up, it has now grown into hashtag campaigns including '#actonclimate', '#savealappad', '#saveearth.

According to sociologists, people thrive to connect and use every opportunity to interact including social media. "When we follow trends, we feel connected. People tend to look back, reflect and feel great about how they managed ups and downs and survived a decade. Here, celebrities do the same and the commoners are willing to imitate or follow," said Sherin Catherine, Sociology Researcher, IIT, Mumbai. 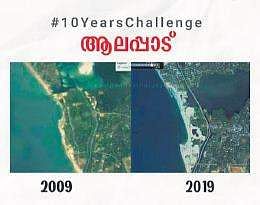 While the new challenge is said to be the follow-up or the continuation of the #throwback trend, the hashtag campaigns against them are a distraction tactic, according to psycologists and are used to recoup superficial minds that have fallen for the #10yearchallenge.

Though a few Mollywood actors including Pearly Maaney, Srinda, Bhavna, Unni Mukundan, Aju Varghese and Ahaana Krishna  have posted their own pictures, some others including Shruthy Menon have strongly opposed the challenge and have posted hashtag campaign memes of climate change and the need to save the earth.

"I don't see a challenge at all. There is no goal set or any thing that is to be achieved. It is just natures role as natural ageing is a phenomenon. But, I think there are a lot of things we should really look at such as the environment. I have no plans to indulge in mindless internet games like this," said Shruthy Menon. IT specialists say that Facebook is trying to update face recognition algorithms and this is indeed a mass data collection.