We will be joining soon for plus one classes and are planning to continue till post-graduation, the six transgenders said.

THIRUVANANTHAPURAM: It was a proud moment for the transgender community in the city. Six of the transgenders, who appeared for the SSLC equivalent examination under the Kerala Literacy Mission, came through the examinations with flying colours. Sury Ishan, Apoorva, Asma, Sakeena, Soorya Krishna, Niya Kukku and Sukanyeah, who secured an aggregate of 70 per cent marks in the exams, say they are very excited.

"It is just like how it used to be in school. We are feeling nostalgic because it brings memories of our school days which we were forced to cut short because of our identity. I used to travel from Bengaluru to Thiruvananthapuram to attend the Sunday lectures, though it was difficult for me. However, with the help of teachers, I managed to follow the syllabus," said Sukanyeah Krishna, a web developer who works in Bengaluru. "I always wanted to stay in Kerala. However, it is difficult to find a job in this state because SSLC pass is the minimum qualification sought by most employers. I was forced to work for daily wages in several companies to earn bread and butter for myself," she said. 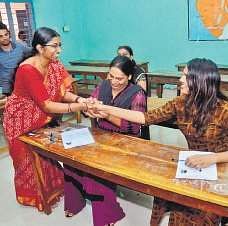 According to Shamila R, central coordinator, classes were conducted every Sunday from 10 am to 5 pm at the Girls Higher Secondary School, Manacaud. "It was obvious that they would make the city proud with their victory. They were very keen to learn from their trainers. There was a study tour which was conducted as part of the curriculum to Kanyakumari-Tirparappu and they thoroughly enjoyed the trip. Marks were also given on the basis of assignments and projects which submitted," said Shamila R, central coordinator, Kerala State Literacy Mission.

When the Aksharashree literacy project of Corporation was rolled out in the city, six of them readily agreed to apply. "We did not face any discrimination here. We have decided to pursue higher education under the Kerala Literacy Mission. We will be joining soon for plus one classes and are planning to continue till post-graduation," said Surya Ishan. Syama S, a member of the transgender community, taught the students Malayalam.

Now we are on Telegram too. Follow us for updates
TAGS
transgenders Kerala Literacy Mission