After a seven-year hiatus, the Global Ayurveda Village at Varkala will finally take off.

THIRUVANANTHAPURAM: After a seven-year hiatus, the Global Ayurveda Village at Varkala will finally take off. The project recently received a boost with the government sanctioning Rs 60 crore for the project.

The Village aims at raising Varkala into a health tourism hub. A wellness centre, health centre, medicinal plant cultivation, physical wellness and yoga-medication centres will be constructed and are expected to attract foreigners. Kerala Industrial Infrastructure Development Corporation (KINFRA) has been appointed as the nodal agency for the realisation of the project.

According to V Joy, MLA, Varkala, the project is also expected to create more job opportunities for local residents.

"A garden full of medicinal plants will be sowed. Women from the area will be involved. The treatment centres will also require participation from the women. We expect to generate jobs for at least 700 to 750 people," said V Joy.

V Joy emphasised on the need for such a centre which can address the lifestyle issues of the country.

"Traditional Ayurveda treatment focuses on both preventive and curative healing. The Global Ayurveda Village will ensure programmes for body detoxification and will focus on traditional ways to boost the immune system," he said.

KINFRA has already procured Rs 25 crore for land allocation. The revenue department has begun land ownership procedures and is in the process of recording its legal framework. According to the officers-in-charge, Ayurvedic groups including Kottakkal Arya Vaidya Sala has deliberated talks for collaboration with the project.

On the other hand, the first phase of the 'Global Ayurveda Village' at Thonnakkal has been completed. The second phase of the project will be on a Public-Private-Partnership (PPP) basis.

The group is already in the process of identifying potential partnerships. A transnational research and documentation centre, an international academy, a finishing school and a digital library are also proposed as part of the project, said a KINFRA officer-in-charge. 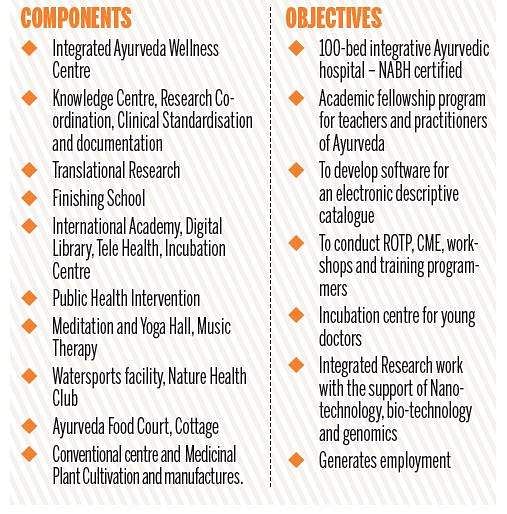