Except for 3 areas, Thiruvananthapuram a landslide safe zone

The unceasing monsoon is wreaking havoc across the state.

THIRUVANANTHAPURAM: The unceasing monsoon is wreaking havoc across the state. Though the India Meteorological Department predicted reduced rainfall the district in the coming days, the threat of landslip and landslide continues to loom large in the hilly areas of Thiruvananthapuram. Recently, an expert team comprising members from the district wing of the Geological Survey of India (GSI) and Soil Conservation Department visited all vulnerable areas in the district. They submitted a report to the district administration warning the authorities of possible landslides at Peringamala, Amboori and Vellarada areas. 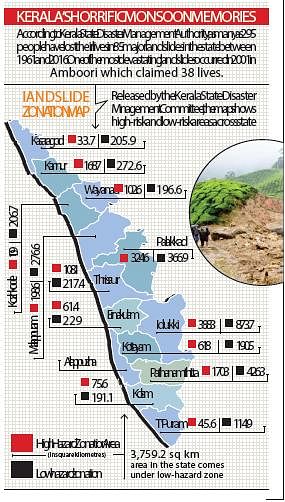 A senior official of the district administration said that they received the report on Monday. “We wanted them to assess the situation in the hilly areas of the district by studying the behaviour of the soil and landscape. They have flagged three villages- Amboori, Vellarada and Peringamala. Fortunately, the situation is currently under control in Thiruvananthapuram and weather predictions are also in our favour. Though landslips are common here, compared to the rest of the state, we are in the green zone,” the official said.  According to the landslide zonation map of Kerala State Disaster Management Authority, Thiruvananthapuram has around 45.6 square kilometres of high hazard landslide-prone area and approximately 114.9 sq kilometres of low hazard landslide-prone areas.

The expert team also warned authorities to initiate evacuation measures during orange alert as heavy rain could possibly trigger landslides. Panchayat secretaries and Tahasildar have been given directions to keep tabs on these areas during rain.According to ton A Nizamudeen, land use commissioner and director of Kerala State Remote Sensing and Environment Centre, deforestation, poor farming practices and encroachment into marginal lands trigger soil erosion and landslides.

“Any human intervention above 33-degree slope is not advisable. But this is rarely followed in vulnerable areas. Right now, first and second-order streams are getting destroyed and seasonal streams have vanished, making the earth unable to contain water. This leads to natural disasters,” said Nizamudeen. He added the need for imposing restrictions on quarrying in forest areas, which blocks natural drains, causing them to reroute from the natural course, leading to landslides.

Now we are on Telegram too. Follow us for updates
TAGS
landslide Thiruvananthapuram