THIRUVANANTHAPURAM: A homemaker in the city recently lost nearly Rs 1.5 crore in a cyber-fraud case. The fraudster identified himself as a resident of London and approached her through social media saying that he had lost his house due to the Covid-19 crisis and had to pay Rs 2.5 lakh to the court to get his house back. He promised her that he would certainly send her a gift along with the money if she helped. For the customs clearance and delivery charges, he requested money which she sent to multiple accounts as instructed by him. After receiving a call from a different number, she realised that she had been cheated and approached the cyber police station. Like her, two other women had also fallen prey to the online fraud and had lost Rs 2 crore. 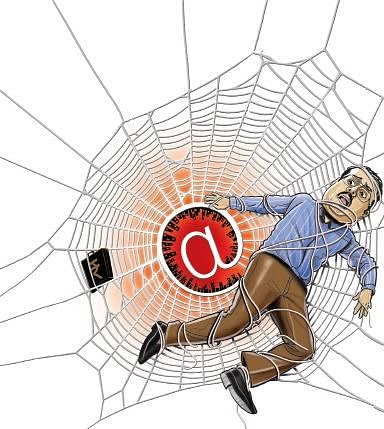 In yet another incident, a woman who had put her old furniture on sale at OLX lost Rs 1.7 lakh. An architecture student fell prey to the same and lost Rs 15 lakh. According to the investigators in the Cyber Cell Department, the number of people becoming victims of online frauds have increased during the lockdown.

“The lockdown has turned out to be a boost for online fraudsters to lure people with attractive offers related to e-commerce franchises. On average, around 20 related cases are being registered by the cyber cell in a month,” said T Shyamlal, DysP, Cybercrime police station, Thiruvananthapuram. Cyber cell experts also say that even though people are aware, many continue to be lured, especially through social media platforms such as Facebook, Instagram and WhatsApp.

Accepting anonymous friend requests on Facebook, particularly that of foreign nationals is one of the reasons behind the increasing online fraud. Scams are carried out by creating lookalike accounts of shopping websites such as Snapdeal, Amazon and Flipkart.Lack of proper knowledge about using e-commerce platforms is also a factor. “For instance, the lady who lost money on OLX didn’t have any knowledge of the payment procedure.

Instead of sending a QR code to the buyer, she was sent a QR code by the unidentified buyer and told to scan it and send her bank account details. We have been advising people not to share their bank details with anyone,” said Shyamlal.The pandemic has also resulted in a large number of layoffs. Targeting such employees, many job scams are being reported wherein fake appointment letters from foreign-based companies are being sent to the people in return for their contact and bank account details.

Police department steps in to create awareness
“Due to the lockdown, people are now glued to their phones and cybercriminals are taking advantage of this by pretending to be bank representatives or e-commerce sellers. In most cases, the culprits are from Delhi or other northern states. In many situations, the money cannot be retrieved,” says Balram Kumar Upadhyaya, Thiruvananthapuram City Police Commissioner.

He also said that only a few victims are willing to file complaints against such fraudsters. Through their Facebook and other social media platforms, the police officials are trying to create awareness among people about online fraud. “Innovative methods are being used nowadays to trick people. So, we are advising people to refrain from replying to such emails and messages and shop only through the respective apps of the online shopping platforms,” said Balram. He also added that strict action will be taken against online fraudsters.

Now we are on Telegram too. Follow us for updates
TAGS
online fraud