Despite asking the public to be on vigil and repeating time and again that we are close to community spread, the state government is yet to confirm it.

By Gopika IS
Express News Service

THIRUVANANTHAPURAM: On June 4, a 41- year- old VSSC staff member hailing from Thrikannapuram in Thiruvananthapuram attended his neighbour’s house warming where 25 people were in attendance. On June 6, he visited the Kazhakoottam branch of SBI and the next day went to meet an astrologer in Thonnakkal.  On June 8, he visited the Thumba branch of SBI and then went to his workplace at VSSC, Thumba. In the days that followed, the man visited a petrol pump, various residences, a school, some offices, Indian Bank (Chalai Branch), provisional stores and sweet store in the Chalai locality and even visited a private hospital here to consult a doctor for minor fatigue, cough, and a few other Covid symptoms. He also visited KSEB office, another private hospital in Thiruvananthapuram and a few people visited his home too till June 23. He was then admitted at a private hospital with severe symptoms and his swab was collected on June 24 which later tested positive on Friday.

He also attended work till June 15 and made frequent visits to his ancestral home in Manacaud and spouses’s family home in Killippalam.

“In Thiruvananthapuram, the health department has identified possible sources of infection in almost all cases. The confirmation is not easy as there are no proof or concurring evidence. They might have travelled some places and did not reveal it to the contact tracing team. While they are not made known, we still have the information. Evidently, we cannot call this community spread then. While the increasing number of asymptomatic cases and random people testing positive are indeed cause of worry, the health department and concerned district administrations are working hard to tackle them and identify the possible routes of spread.,” said a top health official. 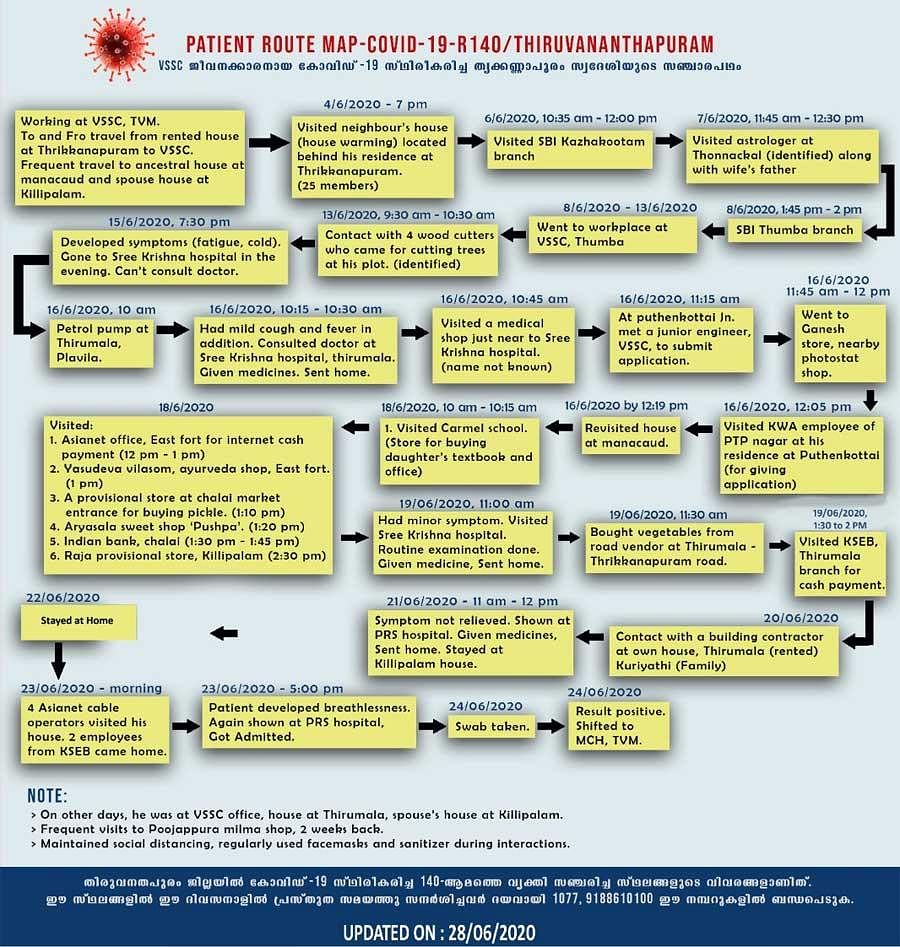 The police who aids the health department in the investigative works is also silent about it. “We hand over all our findings to the district official in charge and it is their discretion to reveal details. We have been assisting them with the tracing and tracking since the beginning,” said a top police official in the district.
However, it should be noted that not long ago state expert committee had asked the government to take precautions and steps under the assumption that the third stage of the disease outbreak- through community transmission has begun. However, back then the government maintained that community transmission can be identified only with more tests and continues to maintain the same even now, almost a month later.

In the report presented to the Chief Minister, the committee said that “It cannot be said conclusively that community transmission did not happen.’

Another health official said that the fact that only the immediate relatives of the patients tested positive for Covid is a clear signal that no active community transmission is happening. “When we test more than 50 people who come in contact with a positive patient, sometimes no one or in some cases a small percentage tests positive. That too people who came in very close contact,” the official said.

While the question looms large and state government reiterating that there is no community transmission, in the last week alone, more than five case with no known source of infection has been identified in the district.