THIRUVANANTHAPURAM: Nedumangad Municipality is looking at a tight contest in the upcoming civic polls. While the LDF, which has held the municipality for over two decades, hopes to continue in power, the UDF and BJP are putting up a strong fight. While the UDF hopes to capitalise on the anti-incumbency factor, BJP is double confident after increasing its seat tally last time.

The incumbent council has 22 LDF representatives, 13 from UDF and four from BJP. This time, the three fronts have given emphasis to woman candidates, especially with the chairperson seat reserved for SC women. LDF has three candidates — S Rajika in Mannoorkonam ward, B K Sreekala in Valiyamala ward, and T Sreeja in Paramuttom — who could be considered for the municipal chairperson post. Senior leaders Harikeshan Nair and N R Baiju are also contesting this time. 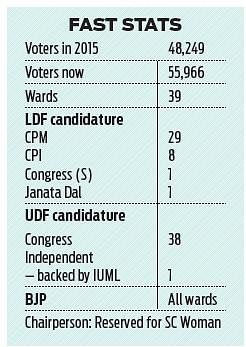 Outgoing chairperson Chettachal Sahadevan, however, chose not to contest. “Nedumangad is the municipality with the highest number of houses built under the Life Mission. We have already completed over 1,780 houses. We also got the ‘Suchitwa Padavi’, a nod to our waste management efforts. We look forward to continuing the work,” he said.

Meanwhile, the UDF camp has plans to reclaim the seats they had lost over a period of time. Former municipal chairperson Vattappara Chandran will contest from Poovathoor, while other senior local leaders like T Arjunan (Parliamentary party leader), K J Binu, M S Binu and Arun Kumar (Mandalam Committee presidents) are also candidates.

UDF has only one chair candidate, Geetha, who will run from Paramuttom ward. “Our chair candidate is contesting from a sure seat and we are confident of winning from there. We have woman candidates in general wards also. Our campaign will call out the LDF’s corrupt deals in the municipality for over two decades,” said Anil Thekkada, general secretary, DCC.

Meanwhile, BJP is counting on the leap it made in the last civic polls. The election in 2015 was the first time the party had more than one representative in the council. The four councillors were elected from Kalluvarambu, Manakodu, Vanda and Mukhavoor, two held by LDF till then and two by UDF. This time, BJP is confident of winning at least 20 seats in the municipality and coming to power here for the first time.

Vijaya Kumar, Nedumangad mandalam committee president of BJP, said the party was certain about coming to power this time. “The public are aware of the corruption in the municipality. The implementation of Central government projects are at its worst here and there is a need for change,” he said.

BJP has confirmed candidates for only 35 seats as of now, including  two SC woman candidates. Vinodini, who will contest from Netta ward, is one of the candidates while the other will be declared later when the candidates are finalised for the remaining three seats.