While Kerala is all set to receive tourists from other states by October end, the beaches in Thiruvananthapuram — Shankhumukham and Kovalam — are out of bounds for tourists

THIRUVANANTHAPURAM: The state government is all set to reopen tourist spots after a long break, but beach tourism destinations in the district are in ruins. Severe sea erosion has made Shankhumukham out of bounds for the public while the major development projects taken up by the Tourism Department at Kovalam have been stalled due to triple lockdown and severe sea erosion. The dire state of these two tourist spots has prompted the tourism authorities to explore and develop a new beach.

According to sources, efforts are on to develop Valya Veli Beach which has been witnessing huge tourist flow off late.Tourism Minister Kadakampally Surendran told Express, “With Shankhumukham off-limits, people have moved on to beaches like Valiya Veli. We are planning to provide more infrastructure and tourism amenities there.”

Powndukadavu ward councillor Medayil Vikraman said a team from the Tourism Department visited the Valiya Veli Beach, which is witnessing a huge inflow of tourists following the lockdown. “The Church authorities have agreed to give more land to provide more amenities for visitors. An average of 500 people visit the beach every evening. The plan is to provide more seating arrangements, lighting and parking facility. A master plan in this regard is being drafted,” said Vikraman.

Work stalled at Kovalam
The state government has sanctioned `20-crore project at Kovalam for the overall development of the destination. Tourism Minister had launched the phase I and II of the project with much fanfare in March 2019. However, many projects initially part of the masterplan had to be shelved.Minister Kadakampally admitted that the department is facing major challenges at Kovalam and unavailability of land is a hindrance.

“The UDF government had given away all available land at Kovalam to Leela Group and now we are struggling. We have given direction to the Uralungal Labour Contract Co-operative Society Ltd (ULCCS) to speed up the ongoing projects,” said Kadakampally.

According to ULCCS officials, many of the projects were stalled following the lockdown. “We will resume work soon. Following the Covid outbreak, many labourers involved in stone works went back to their states. We are waiting for them to come back. The work on stone mandapams and pavements can only be done by the workers from Tamil Nadu,” said an official of ULCCS.

Shankhumukham beach, once a favourite getaway for local tourists, is no more. All that remains is an advanced sea and the dilapidated road.   On Tuesday, Chief Minister Pinarayi Vijayan inaugurated the launch of the restoration work of the Beach Road. The PWD plans to construct a diaphragm wall along the 260-metre road damaged by the rough sea. 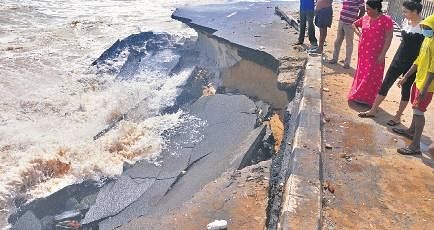 However, the plan hasn’t gone down well with the Irrigation Department. A senior official of the department said the government refused to take up the project mooted by the department to counter sea erosion. “We had submitted `16.5-crore project for the restoration of the beach. However, they turned down our proposal and went ahead with the PWD project. Recently, we received a letter from the PWD requesting us to take up the project which we have refused. Since the involvement of the two departments is unnecessary, we have written to the government. We haven’t received a reply yet,” said the official.

Medayil Vikraman,
Powndukadavu councillor The Church has agreed to give more land to provide more amenities for visitors. An average of 500 people visit the beach every evening. The plan is to provide more seating arrangements, lighting and parking facility. A master plan is being drafted.

The project : According to the PWD, phase 1 of the work would focus on preventing further damage to the road. In Phase II, we will reconstruct the road. “We will be completing the project within six months. The department has sanctioned `5.39 crore for the project under the Rebuild Kerala Initiative,” said the PWD official.