The HC has directed the district collector to file a counter-affidavit and submit a report soon.

THIRUVANANTHAPURAM: An expert team consisting of officials from various departments on Tuesday carried out an inspection at the site near Akkulam, where the Lulu Group’s new mall is coming up, to check on the various violations alleged by environment activists. The site inspection was carried out following orders from the High Court which has directed the district collector to submit a report after the inspection.

The HC has directed the district collector to file a counter-affidavit and submit a report soon. The order comes in connection with a  Public Interest Litigation (PIL) filed by a private party alleging that the construction activities inside the High Tidal Line are violating the Coastal Regulation Zone Act. One of the allegation raised is that the Lulu Group has encroached on Parvathy Puthanar without the permission of the coastal and inland navigation department and revenue authorities. 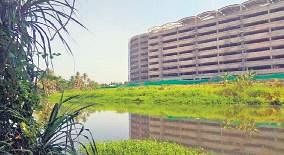 However, according to the revenue authorities, the Lulu Group has the title deed and there is no encroachment. “We will be submitting a report to the district collector soon. We don’t know whether other departments had found any violations,” said an official who was part of the team that inspected the site. As many as 15 officials belonging to various departments including the district collector, revenue district officer, additional district magistrate, tahsildar, officials of coastal and inland navigation department,
Kerala Coastal Zone Management Authority (KCZMA) and Pollution Control Board took part in the inspection.

An official of the district administration said that the district collector would submit the report after getting individual reports from various departments. “We would be compiling all the reports and an affidavit would be filed at the High Court,” said the official. Environment Protection and Research Council President S J Sanjeev alleged that the Lulu Group has encroached on Parvathy Puthanar.

“An inspection was carried out by the district collector and other concerned departments last year following encroachment complaints and clear violations of CRZ norms were identified. There is no title deed for the property and the boundary wall construction on the banks is violating CRZ norms,” said Sanjeev. “The construction debris, clay and other waste were dumped inside the canal. Unfortunately, other departments including irrigation, NHAI and Biodiversity Board were not present,” he alleged.

Now we are on Telegram too. Follow us for updates
TAGS
Lulu Mall