THIRUVANANTHAPURAM: People suffering from various autoimmune diseases developed fewer antibodies after taking both doses of Covid vaccine than healthy people who were vaccinated, a preliminary study conducted in the state has found. The study also found that those, including the healthy ones, who took Covishield developed significantly more antibodies than those who took Covaxin.

However, experts said both vaccines were safe and useful in protecting people from Covid. Kochi-based Centre for Arthritis and Rheumatism Excellence (CARE) published an interim report after studying 196 people for the last three months.

The study aimed at understanding the effects of vaccines on people with rheumatic diseases, especially those with autoimmune inflammatory rheumatic diseases (AIRDs), who have suppressed immune defence. “We found a glaring gap in the levels of antibodies formed in groups that received Covishield and Covaxin shots. It led us to widen the scope and study healthy people,” said Dr Padmanabha Shenoy, an immunologist and clinical director of CARE. 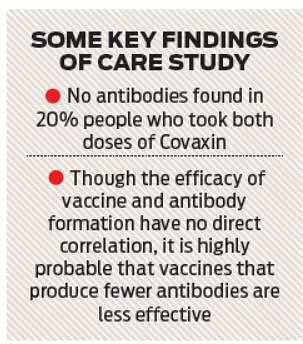 The interim study was published a day after a group of seven doctors published a similar study on healthcare workers. “We also found that around 20 per cent of people who took Covaxin did not develop antibodies. However, those who took the shot need not panic as 80 per cent of them had developed antibodies. Also, there could be other factors – not included in the study – that boosted their immunity,” said Shenoy. Most of the people included in the study belonged to the 40- 50 age group.

The preliminary report called for a wider study. “We have studied 300 people and will cover a total of 1,000 people in 18 months. Most reports appearing these days are based on study of B-cells. We need more facilities to understand the effects of vaccines on T-cells,” said Shenoy. He said there were efforts to involve Rajiv Gandhi Centre for Biotechnology (RGCB) in the study. He said the findings had been sent to the Prime Minister’s Office and NITI Aayog, in the first week of May. Health experts allayed people’s concerns regarding Covaxin after more reports emerged on the level of antibodies it developed.

“We have got two vaccines against Covid. It is proven that both are effective. One should not read too much into the antibody levels as long as it is meeting the threshold of protection,” said Dr Anish T S, assistant professor at the Department of Community Medicine, Government Medical College Hospi tal , Thiruvananthapuram. He, however, said numbers did favour Covishield in other studies conducted in the state and Delhi. After the initial hiccup, there was a rising demand for Covaxin after reports came about its lesser neurological impact and ability to address genetic mutations of the coronavirus. The state received over nine lakh doses of Covaxin as compared to nearly one crore doses of Covishield.

The widely used Oxford-AstraZeneca’s Covishield vaccine has claimed an efficacy of 62-90 per cent, while the ICMR-Bharat Biotech’s Covaxin claimed 81 per cent efficacy in its preliminary data from phase-three trials.

Now we are on Telegram too. Follow us for updates
TAGS
antibodies autoimmune disorder Covid vaccine