Your genetic data can fetch up to USD 5,000 a year

As per the proposal, Shivom will create an ecosystem allowing DNA donors to have their genome sequenced and stored on a secure platform, using which data can be shared or sold by the donor.

VIJAYAWADA:The state government, which has embraced technology for better governance, is now moving towards facilitating ethical DNA research. In this regard, the government has signed an MoU with Shivom, a blockchain-based start-up firm from Germany, which proposes to create a platform for people to sell their genetic information for research purposes and earn up to $5,000 annually in the process.

As per the proposal, Shivom will create an ecosystem allowing DNA donors to have their genome sequenced and stored on a secure platform, using which data can be shared or sold by the donor. Explaining how the project works, special chief secretary and IT advisor to Chief Minister Chandrababu Naidu, JA Chowdary, told TNIE that pharmaceutical and healthcare firms would approach the donor, who could decide if he/she wants to share or sell his/her data.

"A legal agreement would be signed by both parties wherein the firm agrees to pay a certain remuneration for using the donor's data for clinical trials. Depending on the agreement, the donor can earn anywhere between $300 and $5,000 annually as long as the firm uses the details," he explained. 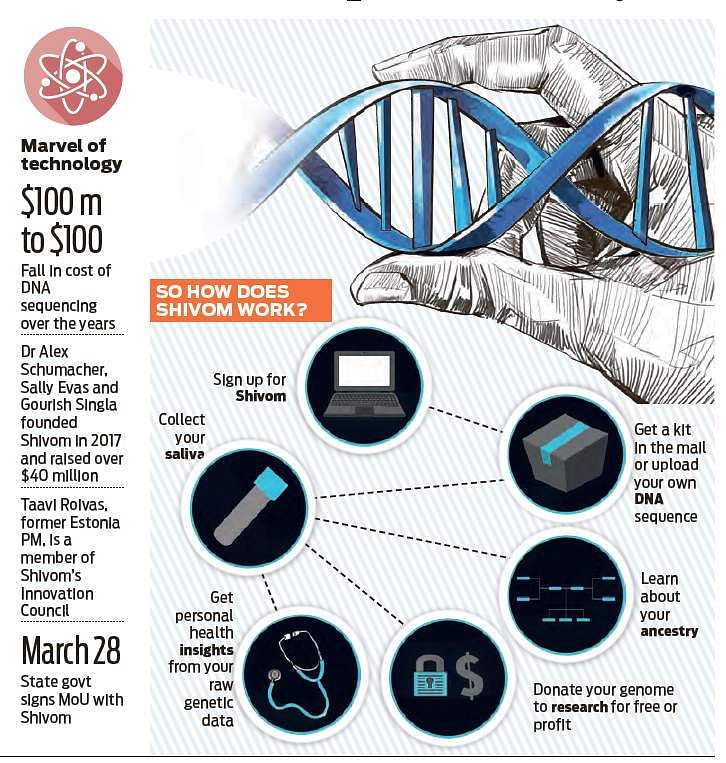 However, the main objective of the project, Chowdary added, was to revolutionise DNA data usage by empowering donors. "Till now, patients' data has been taken by healthcare firms without consent. Now we aim to give the power of sharing data to the public who can decide if they want to share or sell their data," he said. If the donor desires to have his/her personal details, including name, concealed, Shivom will anonymise it for the donor, Chowdary observed.

The state government hopes the project will help Andhra Pradesh become healthier. "Genetic research can be used to develop medicines for cancer and other genetic diseases. Our state stands to gain significantly," Chowdary remarked.

But selling of data is not all that the project proposes to do. It also provides an opportunity for the donor to get his/her genetic profiling done and seek a customised healthcare plan for their genetic profile.

"We are passionate about changing the healthcare status quo and driving a fundamental evolution that results in a system of universal access to the best and most effective predictive medicine. This agreement with the state of Andhra Pradesh is hugely significant for Shivom as it is the first step towards a new, accessible world of healthcare," said Dr Axel Schumacher, co-founder, and CEO of Shivom, while signing a pact with the state government in March last week.

But how feasible, practical and secure is DNA sequencing and storage? "We are yet to figure out the modalities. For now, it will be taken up as a pilot project. We have given six months to Shivom, which will will set up a training academy and development centre in Visakhapatnam. We have asked the firm to show us how practical and beneficial it is for the state. If we are convinced with the pilot project, we will scale it up," JA Chowdary said, adding that blockchain technology, the calling card of Shivom, can't be tampered with.

The firm proposes to use blockchain technology to create the largest genomic data hub in the world.

Fall in cost of DNA sequencing over the years

Dr Alex Schumacher, Sally Evas and Gourish Singla founded the start-up in 2017 and raised over $40 million

Preparing roadmap for course of treatment including choice of most effective medication and dosage, prevention of disease in healthy individuals, prediction of disease risk, diagnosis, prognosis, identification of new drug targets

-- Genetic data will be uploaded on Shivom

-- Blockchain technology is used to securely store the data

-- If donor wishes to share or sell data, he/she has to use the key to give consent to researcher