Chief Minister N Chandrababu Naidu on Monday demanded that the Centre declare the floods in Kerala a national calamity and extend all necessary support until the State overcomes the crisis. 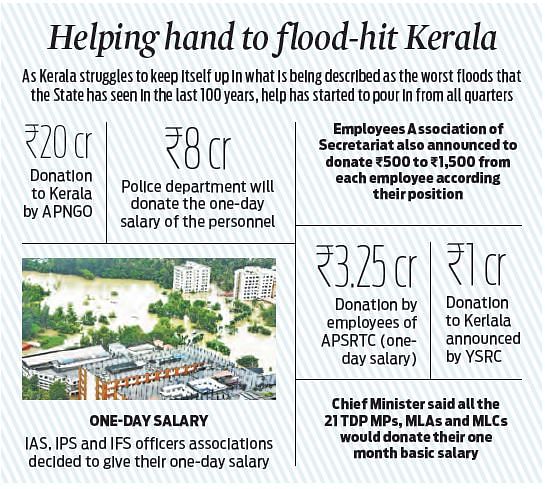 VIJAYAWADA: Chief Minister N Chandrababu Naidu on Monday demanded that the Centre declare the floods in Kerala a national calamity and extend all necessary support until the State overcomes the crisis.
Naidu, who was speaking to media persons at the Interim Government Complex in Velagapudi on Monday, said the amount promised by the Centre to Kerala — Rs 600 — was grossly insufficient.

Stating that Andhra Pradesh was extending aid to the tune of around Rs 50 crore,  the Chief Minister urged the entire nation to come together to help Kerala. During the discussion, Naidu said the Centre was yet to release Rs 350 crore of the Rs 1,000 crore aid it announced to AP when cyclone Hudhud devastated several parts of the State and observed that the Rs 61,219 crore allocated by the 14th Finance Commission for dealing with natural calamities in the country was grossly inadequate and called for increasing the amount. Naidu added that he spoke to his Kerala counterpart Pinarayi Vijayan twice and enquired about the situation. Andhra Pradesh will send rice worth Rs 6 crore to the affected State as requested by its Chief Minister.

The State government has moved 6,336 people to the 16 relief camps set up in 10 mandals of the Godavari districts after they were lashed by rains for several days. The downpour has caused crop damage and cut off some villages from major roads.

The Chief Minister said the extent of crop damage caused by the floods would be assessed soon.  Road connectivity has been hit in 36 villages. Naidu said 111 mandals had recorded excess rain while 217 received just normal rainfall. Eighty-four mandals recorded scanty precipitation.  “We are in a strange situation. While rain battered East and West Godavari and Krishna districts, regions including Rayalaseema, Prakasam and Vizianagaram have received 33 to 56 per cent less rainfall,’’ he said.

Naidu added that the State government had spent Rs 56,000 crore on irrigation projects in four-and-half- years and claimed over 50 per cent of the Polavaram project works had been completed. He alleged that the State government was yet to be reimbursed of Rs 2,622 crore it had spent on the project and said the revised estimate of the irrigation project was yet to be accepted.

Now we are on Telegram too. Follow us for updates
TAGS
Kerala flood N Chandrababu Naidu